A native of Indiana, Hill is a member of the Democratic Party, and as a member of Congress belonged to the conservative-leaning Blue Dog Coalition of that party. Hill's district is in the southeastern part of the state, stretching from Bloomington to the Indiana side of the Louisville metropolitan area.

Hill attended Seymour High School, where he was a first-team all-state player in basketball and an all-American. He set the record for leading scorer in school history, with 1,724 points.[1] He was inducted into the Indiana Basketball Hall of Fame in 2000.[1][2]

Hill graduated from high school in 1971[2] and accepted an athletic scholarship to Furman University in Greenville, South Carolina, where he graduated in 1975.[1][3] After graduating from college, Hill moved back to Seymour, Indiana and joined his family's business.[3]

Hill was a member of the Indiana House of Representatives from 1982 to 1990.[1][4] Hill chaired the state House Democratic Caucus' Campaign Committee from 1985 to 1989,[5] and in that position helped Democrats win House elections and secure a majority.[4]

In 1990, as a state representative, Hill ran for the U.S. Senate in the 1990 special election to fill the last two years of Dan Quayle's term (Quayle had been elected Vice President). Hill attracted much attention (and earned media) during that race for walking the length of the state (from the Ohio River to Lake Michigan) to meet with voters.[4][6] Hill ultimately lost to Senator Dan Coats (who the governor had appointed to fill the vacancy), 54% to 46%—a smaller margin than expected.[6]

During five non-consecutive terms in the United States House of Representatives, Hill was a member of the Blue Dog Coalition of moderate and conservative Democrats.[7][8] Hill served as the Blue Dogs' co-chair for communications[9] and later as co-chair for policy.[10]

In 2001, Hill voted for the No Child Left Behind Act (NCLB).[11] In 2008, Hill said that the law needed to be revamped, saying that he did not object to accountability for schools, but that the act infringed too much on local control and unrealistically required special needs children to meet standardized testing requirements.[12] Hill also said that the federal government had failed to provide an increase in federal school funding, as had been promised when NCLB was passed.[12]

Hill voted in 2002 to authorize the use of the military force against Iraq in 2002,[13] but criticized the George W. Bush administration's conduct of the reconstruction of Iraq.[14][15] In October 2003, Hill said that the 2003 invasion had been well-planned but the subsequent reconstruction had not: "The president did not plan well for winning the peace and for rebuilding the nation."[14][15] Hill blasted Bush's "go-it-alone" strategy and said that Bush had failed to obtain support from the international community, leading to huge U.S. expenditures that sapped away funding that could otherwise go to domestic priorities such as "homeland security, health care, education and debt reduction."[14][15]

In 2007, Hill—along with Representative Lee Terry of Nebraska, a Republican—introduced a measure seeking to increase Corporate Average Fuel Economy (CAFE) standards to between 32 mpg (7.4 L/100 km) and 35 mpg (6.7 L/100 km) by 2022.[16] The Hill-Terry proposal was more limited than a competing proposal introduced by Representative Edward J. Markey, Democrat of Massachusetts, and Representative Todd Russell Platts, Republican of Pennsylvania, which sought to raise CAFE standards for combined car-truck fleets to 35 mph by 2018.[16] The Hill-Terry proposal was supported by the United Auto Workers.[16] and by industry groups such as the Alliance of Automobile Manufacturers and National Association of Manufacturers,[17] while the Markey-Platts proposal was backed by the Sierra Club and other environmentalist groups.[16] The final energy bill was a compromise that mandated a 35 mpg CAFE standard by 2020.[18]

In 2008, ahead of the Indiana presidential primary, Hill endorsed Barack Obama over Hillary Clinton.[6]

During his last years in the House, Hill earned a 70 percent rating from the Human Rights Campaign, a GLBT rights advocacy group. Hill supported the repeal of don't ask, don't tell, voted for the Employment Non-Discrimination Act in 2010, and opposed a proposed amendment to the U.S. Constitution to ban same-sex marriage.[20] Hill did not campaign for same-sex marriage, however, and did not cosponsor legislation brought by 121 Democrats to repeal the Defense of Marriage Act, which barred federal recognition of same-sex marriage.[20] As public attitudes changed, Hill's position shifted, and in 2015, while running for Senate, Hill said: "Marriage equality is especially close to my own heart. I’m proud of Hoosiers who are fighting to make sure our friends and neighbors are guaranteed equal rights."[20]

Hill was elected to the House in November 1998. He defeated Republican Jean Leising, 51% to 48% and Libertarian Diane Merriam, 1%, winning the seat vacated by retiring 34-year incumbent Lee H. Hamilton. 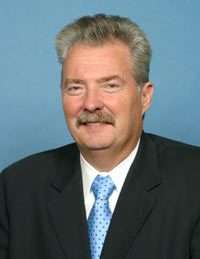 In 2002, Hill defeated Republican Mike Sodrel with 51 percent of the vote. Sodrel, a New Albany trucking company owner, had 46 percent.

In November 2004, in a rematch, Hill lost to Sodrel by a razor-thin margin of about 1,500 votes (about a half of a percentage point). There was a recount following reports of voting irregularities, namely malfunctioning voting machines in at least three counties.[26][27] Hill gained only about two dozen votes in the recount, however, and conceded the election in early December 2004.[28]

Hill won the Democratic nomination in the 9th District in 2006. He was included in the "First Wave" of the Democratic Congressional Campaign Committee's "Red-to-Blue" program.[29]

Texas millionaire Bob J. Perry gave more than $5 million to the Economic Freedom Fund, a 527 group, which included Hill as one of its targets for removal. The group paid for automated "push poll" calls attacking Hill. Such calls were stopped after action by the Indiana Attorney General.[30] Cook Political Report rated the race as a toss-up.[31]

As is the custom for returning members of Congress, the Democrats gave Hill back his seniority.[33] He was named to the Energy and Commerce and Science and Technology committees.

In 2008 Hill and Sodrel again fought for the 9th District. Last year, the race moved between Likely D to Lean D on the Cook Political Report.[34] Fund raising in 2008 had become more one-sided than in 2006, with Hill far ahead in the numbers game, according to reported income.[35]

In 2011, after leaving Congress, Hill was hired by APCO Worldwide, "as a senior vice president in the company's government relations practice and a member of the firm's international advisory council."[43]

APCO represents a number of clients listed in Lobbying Disclosure Act filings.[44] In 2014, Hill left APCO to start his own solo lobbying firm, representing Cook Industries, a company located in his former district.[44]

Following an announcement by Senator Dan Coats that he would not seek reelection, however, Hill announced on May 15, 2015, that he would seek the open Senate seat as the Democratic nominee.[46] Democratic state Representative Christina Hale considered running for Senate as well,[46] but ultimately decided against it.[47]

Former Senator Evan Bayh, who from 1999 to 2011 held the seat currently held by Coats, also initially opted against joining the race.[48] As a result, Hill ran unopposed for the Democratic nomination.[49]

Hill withdrew from the general election on July 11, 2016 in favor of Bayh, who announced he was entering the race.[50]

Hill is a Methodist[51] and a member of the First United Methodist Church in Seymour.[52]