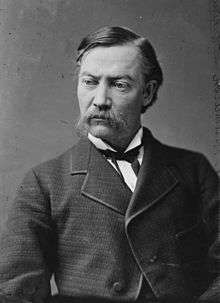 Andrew Holman Hamilton (June 7, 1834 – May 9, 1895) was a politician from Indiana who served in the United States House of Representatives. He was born in Fort Wayne, Indiana, June 7, 1834, attended the common schools and graduated from Wabash College in Crawfordsville in 1854. Hamilton studied law at Harvard University and after being admitted to the bar in 1859, he began to practice law in Fort Wayne. He was elected as a Democrat to the Forty-fourth and Forty-fifth Congresses (March 4, 1875 – March 3, 1879). After his term in the House, he resumed the practice of law and died in Fort Wayne on May 9, 1895. He is interred in Lindenwood Cemetery.