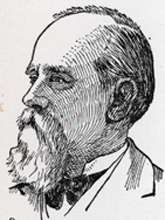 Born in Aurora, Indiana, Holliday spent the early part of his life on farms in Indiana, Missouri, and Iowa. He attended the common schools and taught in the public schools in Iowa. During the Civil War enlisted in the Fifth Kansas Regiment and served until August 12, 1864, when he was mustered out with the rank of first sergeant. He attended Hartsville College, Bartholomew County, Indiana. He engaged in teaching in Jennings County, Indiana. He studied law at Mount Vernon, Indiana. He was admitted to the bar in 1873 and commenced practice in Carbon, Indiana. He moved to Brazil, Indiana, in 1874. He served as mayor of Brazil 1877-1880, 1887, and 1888. City attorney in 1884. He served as member of the city council 1892-1896.

Holliday was elected as a Republican to the Fifty-seventh and to the three succeeding Congresses (March 4, 1901-March 3, 1909). He was not a candidate for renomination in 1908. Reengaged in the practice of law in Brazil until 1922. He died in Brazil, Indiana, March 13, 1936. He was interred in Cottage Hill Cemetery.