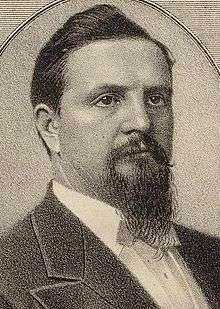 Born in Stirlingshire, Scotland, White attended the common schools. He immigrated to the United States as a young man in 1854 and settled in Fort Wayne, Indiana, where he worked as a calico printer and tailor. Upon the outbreak of the American Civil War, he volunteered for service in the Union Army and was elected captain of Company I, 30th Regiment Indiana Infantry. He was wounded at the Battle of Shiloh on April 7, 1862, and resigned from the Army eight months later, in December.

White returned to Fort Wayne and was elected a member of the city's Common Council in 1874. He also owned a department store, ran a wheel manufacturing business, and worked as a banker.

White was a delegate at the 1892 Republican National Convention and a commissioner for the World's Columbian Exposition in Chicago in 1893. He died on October 9, 1897, in Fort Wayne and was interred there in Lindenwood Cemetery.