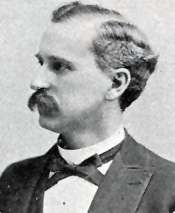 Born near Rensselaer, Indiana, Faris attended the public schools. He was graduated from Asbury (now De Pauw) University, Greencastle, Indiana, in 1877. He studied law. He was admitted to the bar in 1877 and commenced practice in Indianapolis, Indiana. He moved to Terre Haute, Indiana, in 1880 and continued the practice of law. He was an unsuccessful Republican candidate for judge of the circuit court in 1884.[1]

Faris was elected as a Republican to the Fifty-fourth, Fifty-fifth, and Fifty-sixth Congresses (March 4, 1895 – March 3, 1901). He served as chairman of the Committee on Manufactures (Fifty-fifth and Fifty-sixth Congresses). He declined to be a candidate for renomination in 1900. He resumed the practice of law in Terre Haute, Indiana, and shortly thereafter moved to Washington, D.C., and continued the practice of law until his death in that city on April 17, 1914. He was interred in Highland Lawn Cemetery, Terre Haute, Indiana.