Robert Dale Owen (November 7, 1801 – June 24, 1877) was a Scottish-born American social reformer who was a longtime exponent in the United States of the socialist doctrines of his father, Robert Owen, as well as a politician in the Democratic Party. He served in Congress, where he successfully pushed through the Smithsonian Institution bill and served on the first Board of Regents.

Born in Glasgow, Scotland, Owen emigrated to the United States in 1825, and helped his father create the community of New Harmony, Indiana. After the community dissolved, Owen returned briefly to Europe, then moved to New York City and became the editor of the Free Enquirer, a socialistic and anti-Christian weekly, which he ran with Frances Wright from 1828 to 1832.[1]

Owen's Moral Physiology, published in 1830 or 1831, was the first book to advocate birth control in the United States (specifically, coitus interruptus). 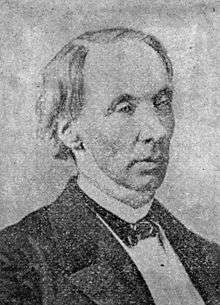 Robert Dale Owen as he appeared in his later years.

In 1829 and 1830, Owen was an active leader in the Working Men's Party in New York City. In contrast to many other Democrats of the era, Owen and Wright were opposed to slavery, though their artisan radicalism distanced them from the leading abolitionists of the time.[2]

He returned to New Harmony, Indiana, in 1833 and served in the Indiana House of Representatives twice (1835–1838; 1851–1853). There he distinguished himself by securing appropriations for the public school system.[1] After two unsuccessful campaigns, he was elected to the United States House of Representatives in 1842, and served from 1843 to 1847. While in Washington, he drafted the bill for the founding of the Smithsonian Institution. He was on the first Board of Regents and chaired the Building Committee, which oversaw the construction of the Smithsonian Institution Building. Owen's committee selected James Renwick, Jr. as architect, Gilbert Cameron as the contractor, and the Seneca Quarry for its distinct red sandstone. In 1849, he published Hints on Public Architecture to argue the case for public buildings such as the Smithsonian Castle.[3]

Robert Dale Owen was married to Mary Jane Robinson with whom he had six children, two of whom died at an early age.[4]

Owen was elected a member of the Indiana Constitutional Convention in 1850, and was instrumental in securing to widows and married women control of their property, and the adoption of a common free school system. He later succeeded in passing a state law giving greater freedom in divorce.

In 1853, Franklin Pierce appointed Owen as United States minister to the Kingdom of the Two Sicilies at Naples.[5] After leaving that post in 1858, Owen retired from political life, but remained an active intellectual.

During the Civil War, he served in the Ordnance Commission and the Freedmen's Bureau.[1] He wrote an open letter to President Lincoln on September 7, 1862, urging him to end slavery on moral grounds. A few days later the Emancipation Proclamation was read to the Cabinet. In March 1865, he submitted a radical initial draft of the Fourteenth Amendment that was eventually modified into the final draft.

He was a strong believer in Spiritualism and was the author of two well-known books on the subject: Footfalls on the Boundary of Another World (1859) and The Debatable Land Between this World and the Next (1872).

Owen died at his summer home in Lake George, New York, and was buried in New Harmony, Indiana. The town of Dale, Indiana was named after him. In 1911, the women of Indiana dedicated a memorial to Robert Dale Owen[6] on the lawn of the Indiana Statehouse.[7]