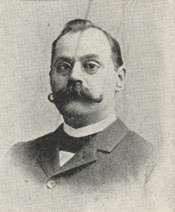 Born near Huntingburg, Indiana, Bretz attended the country schools and Huntingburg High School. He taught school 1876-1880. He studied law, and was graduated from the Cincinnati Law School in 1880. He was admitted to the bar and commenced practice in Jasper, Indiana. He served as prosecuting attorney of the eleventh judicial circuit 1884-1890.

Bretz was elected as a Democrat to the Fifty-second and Fifty-third Congresses (March 4, 1891-March 3, 1895). He was an unsuccessful candidate for reelection in 1894 to the Fifty-fourth Congress. He served as judge of the circuit court of Pike and Dubois Counties from 1895 until his death. He served as delegate to the Democratic National Convention in 1900. He died in Jasper, Indiana, December 25, 1920. He was interred in Fairmount Cemetery, Huntingburg, Indiana.