For other people with the same name, see Donald Bruce (disambiguation). 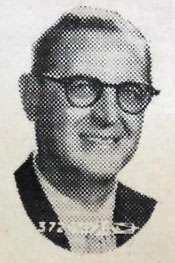 Born in Troutville, Pennsylvania, Bruce graduated from high school in Allentown, Pennsylvania, and attended Muskingum College in New Concord, Ohio. He was employed in the radio broadcasting industry for twenty years, serving as program director, business manager, and general manager. In 1960 he was elected to the House as a Republican from Indiana, serving two terms before being defeated in the 1964 senatorial primary.[1]

Following the landslide defeat of Barry Goldwater in the November general election, Bruce joined with other conservatives to discuss responses to the seeming liberal triumph represented by Lyndon Johnson's reelection. This led to a subsequent meeting in December at which the nascent organization was named the American Conservative Union and Bruce was elected as its first chairman, a position he held until October of the following year. He also established Bruce Enterprises, a management and political consulting firm.

Bruce died August 31, 1969 in Round Hill, Virginia and is buried nearby.