Elliot's Beach (popularly known as "Besant Nagar Beach" or "Bessie") is located in Besant Nagar, Chennai, India. It forms the end-point of the Marina Beach shore,[1] and is named after Edward Elliot, Governor of Madras.[2] It has the Velankanni Church and the Ashtalakshmi Kovil nearby.[3] In the colonial era, it was a fairly exclusive place limited to white people. As of 2016, there are many restaurants near the beach. 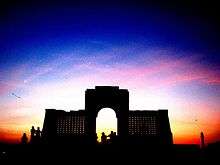 Schmidt Memorial in the evening

A prominent landmark on this beach is the Karl Schmidt Memorial. The memorial is named after the Dutch sailor who lost his life in the process of saving others from drowning.

Elliot's Beach is one of the cleanest beaches in the city of Chennai. It is located towards the south of Marina Beach and was an extremely calm and tranquil place. As the beach does not offer much activity, it is ideal for long walks. Moreover, the ones who want to soak their feet in the splashing sea water and lose themselves completely in the arms of the nature, head on. Elliot's Beach is quite a hit amongst both the tourists as well as the natives of Tamil Nadu.

The Ashtalakshmi Temple is around 20 years old and has modern style architecture. It is dedicated to Goddess Lakshmi and appears different from the rest of the Temples in South India.

Restaurants along the shore