Rauville-la-Place is a commune in the Manche department in Normandy France. It is located just to the northeast of Saint-Sauveur-le-Vicomte. In 2007 the population was 391.

In 2007 the population of Rauville-la-Place was 391. There are 172 multi-person families and forty-eight single person homes (with twenty men and twenty-eight females living alone), 56 were couples without children, 56 couples with children and 12 single-parent families.

Population growth and loss is shown in the following charts: 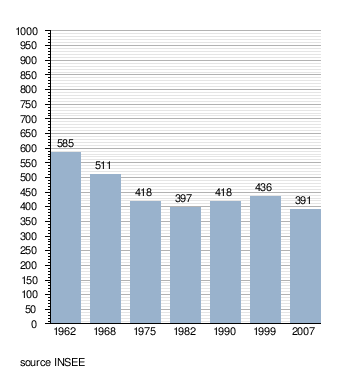 Rauville-la-Place had 227 homes, 172 were primary homes, of which thirty-five were second residences and fifteen were unoccupied. Two-hundred-seventeen of these were houses and three were apartment buildings. Of the 172 primary residences, 139 were occupied by its owners, 37 were occupied by renters and their families and three were let at no cost. Nine residences had two bedrooms, 23 had three, 44 had four and the rest had. 131 residences had one parking place on the property, with 82 residences having one vehicle, and 75 having two or more.[1]

In 2007, 245 residents were of working age, of which 186 were active and 59 inactive. Of the 186 people considered to be active, 175 were employed and eleven were unemployed. Of the fifty-nine who were inactive, thirty-one were retired, ten were students and eighteen were classified as "other inactive".[2]

Of the 11 business establishments in Rauville-la-Place in 2007, 1 was a grocer's, 6 were construction businesses, 2 were car repair businesses and 2 were lodging and restaurant businesses.[4]

There were 6 service businesses in Rauville-la-Place in 2009: a bricklayer, a painter and plasterer, a carpenter, a plumber, an electrician and a restaurant.[5]

The only commercial establishment in 2009 was a chemist's shop.[6]