Barneville-Carteret is a commune in the Manche department in the Normandy region of north-western France.[1] For many years it has been a popular seaside resort destination.

The commune resulted from a merger of two communes in 1964: Barneville-sur-Mer and Carteret whose port has ferry connections to the Channel Islands.

Barneville-Carteret is located on the west coast of the Cotentin Peninsula some 40 km south by south-west of Cherbourg and 10 km north of Portbail. Access to the commune is by highway D650 from Les Moitiers-d'Allonne to the north which passes through the north of the commune and continues south-east following the coast to Le Pont de La Roque. The commune is both a seaside resort and a port.[3][4] 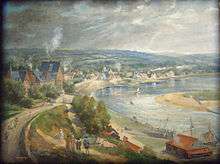 The port in the 19th century by Adolphe Lalyre

The Port of Carteret is the present port of Barneville-Carteret. Sometimes called a "port of the isles", it is located on the right bank of the mouth of the Gerfleur River, at the end of Cape Carteret. A rescue station was built in 1865. The large pier and south mole were completed in 1880. In the following year a ferry began service to Jersey. The small port was used as a shelter for fishermen during spring tide, In 1945 the port was enlarged with the help of combat engineers from the American 280th Battalion stationed in Carteret.[5]

Built on a hill and dating to the Middle Ages, Barneville is built around the church of Saint Germanus of Auxerre. Its architecture is Romanesque, and it was fortified during the Middle Ages for coastal surveillance. The main shops and services of the area are here and there is a market on Saturday. In the street below the town the remains of medieval walls that protected the city and seaside can be visited with a view of Cartaret harbour, the sea, and the Channel Islands.

Barneville Beach is a residential area consisting primarily of campsites and vacation homes. The city is quiet out of season but experiences heavy traffic during the summer. The resort area spreads into the neighbouring town of Saint-Jean-de-la-Rivière, which was built on an ancient sand dune.

Like the Village du Tôt, this village is a small hamlet located on the road that leads to the mouth of the Gerfleur from the town of Saint-Jean-de-la-Rivière.

Built on the edge of the harbour, it was once home to fishermen who moored their boats close to their homes. Carteret harbour allowed them a safe anchorage without the need to build a port.

The village straddles the communes of Barneville-Carteret to the northwest and that of Saint-Jean-de-la-Rivière to the south-east.

A list of online mapping systems can be displayed by clicking on the coordinates (latitude and longitude) in the top right hand corner of this article.

The Cap de Carteret is located at the end of the Armorican Massif and retains traces of the formation with Precambrian deformed granites and metamorphic schist, Cambrian folded arkose from the Variscan orogeny, and shale and armoricain sandstone from the Ordovician period.

From Barneville to Saint-Jean-de-la-Rivière the coast is lined with sand dunes backed by tidal marshes.

The commune is bordered by the sea. The construction of the port in the 19th century was accompanied by the diversion of the Gerfleur river whose mouth was located at the current port.

The town has a temperate ocean climate with an average humidity of 84 percent. Its location on the coast results in a strong sea breeze and frequent storms. There are significant seasonal variations in temperature and rare days of frost (7.3 days a year). The combined effects of wind and tides cause rapid weather changes: in the course of a day, sun and rain can follow one another within a few hours. The influence of the Gulf Stream and the mild winters allow the growing of Mediterranean and exotic plants such as mimosas, palms and agave. Average humidity is 84.42% which varies only by about 2-3% throughout the year.[6]

The commune is served all year by two services operated by Manéo:

An extra service is provided in summer:

In festival periods on Tuesdays, Wednesdays, Thursdays and Sundays, it is possible to go from Portbail to the centre of Carteret on the Train touristique du Cotentin. The nearest main railway is 29 km away at Valognes which is served by the SNCF Mantes-la-Jolie–Cherbourg railway

Barneville: The "ville de Barni" (Barni town) after the name of a Scandinavian person.[8]

The famed de Carteret family of the Norman nobility played powerful roles in English history. They held many possessions on the continent, the Channel Islands, and later, in the American colony. Their surname stems from Carteret, the stony anchorage site in Normandy. [11] Guy de Carteret, a.k.a. "The Fowler", (circa 960-1004) was the first Lord of the Barony of Carteret in Normandy for which there is record. They also held the lordship of St. Ouen on the Isle of Jersey. Family members assisted William the Conqueror at Hastings and took part in the Crusades alongside Robert, son of the duke of Normandy. "Three times has the Island of Jersey been rescued by the valor and sagacity of members of this family from the dominion of the French, events of unequaled importance in its history...." [12]

In the village of Barneville, behind the church, is the remains of a Motte-and-bailey castle which was transformed into a calvary that was called. called Mallet's Mound after the Mallet family of Carteret and Barneville mentioned in 1066.[13] The square church tower from the 15th century has a parapet over a blind arcade which was besieged by the English in September 1499.[13]

Barneville and Carteret evolved into resorts during the Belle Époque when seaside holidays came into vogue.[14] 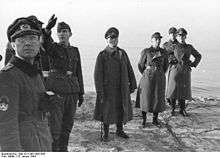 General Rommel at Carteret in 1944

After the invasion of June 1940 the communes of Carteret and Barneville-sur-Mer became important sites in the Atlantic Wall. The fortifications of Barneville-sur-mer, Hatainville, Beaubigny and Carteret bore the codes "Wn 329", "Wn 326", "Wn 325", "Wn324d" and "R 612". Most fortifications are still visible except at Baubigny where it was totally buried in the sand.

On 18 June 1944 an armoured column of the 69th regiment of the 9th US Infantry Division entered Barneville and, after ten days of fighting, the town was liberated. The US military remained in Barneville and Carteret until autumn 1945. At Graffard mansion there were performances of the "Can-can" for the US soldiers. 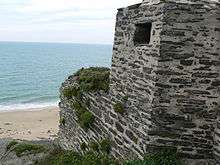 Entrance to German bunker at Carteret

(Not all data is known)

The Municipal council is made up of 19 members including a Mayor and 5 deputies.[19]

Barneville-Carteret has twinning associations with:[20]

In 2010 the commune had 2283 inhabitants. The evolution of the number of inhabitants is known from the population censuses conducted in the commune since 1793. From the 21st century, a census of communes with fewer than 10,000 inhabitants is held every five years, unlike larger communes that have a sample survey every year.[Note 1]

Sources : Ldh/EHESS/Cassini until 1962, INSEE database from 1968 (population without double counting and municipal population from 2006) 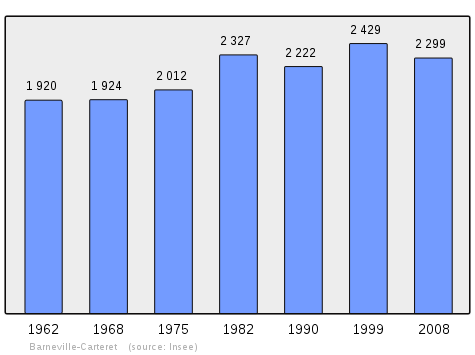 The commune has a primary school - Le Clos des Sources under the Academy of Caen.[21]

The Athletic Union Côte des Isles has a soccer team in the Basse-Normandie League and one in the District Division.[22]

Barneville-Carteret has featured in the following films:

Tourists are attracted by, among others, the marina (311 berths inside, 60 visitor berths, and 95 anchorages). Fishing activity is important and diversified in the fishing port: fish (flounder, pouting, dogfish), but mostly crustaceans (spider crabs, crabs, and lobsters). There are numerous activities: swimming and water sports, angling (on the beach Barneville at low tide in the rocks or sand there are limpets, cockles, whelks, periwinkles, crabs, velvet crabs, and shrimp. At Carteret point it is possible to find Weever fish. There is also hiking in the dunes, golf, and horseback riding.

Since 1993,[16] the Foundation for Environmental Education has certified Barneville-Carteret (beaches and port) with a Blue Flag for environmental quality and since 2013 as a "FamilyPlus" Beach. The town's seaside resort has been classified as a "Tourist Commune" since 1921.[23] 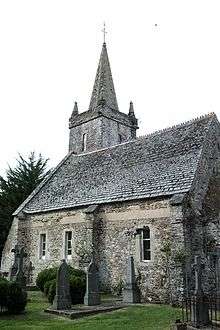 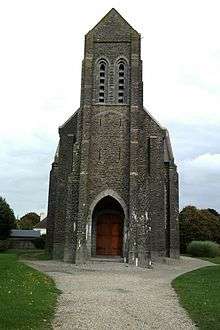 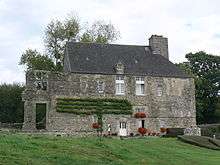 Carteret is linked to Portbail by the Train touristique du Cotentin during the season. There is also a railway station in Barneville located between the town and the harbour bridge. 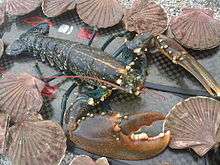 Barneville Beach and the foreshore of Cape Carteret at low tide are ideal places for recreational fishing. The popular and famous species in this area are:

The commune has several buildings and sites that are registered as historical monuments:

A Railway Carrriage called "Bruhat" No. BB44586 (19th century) is registered as an historical object.

The Church contains two items that are registered as historical objects:

Notable people linked to the commune 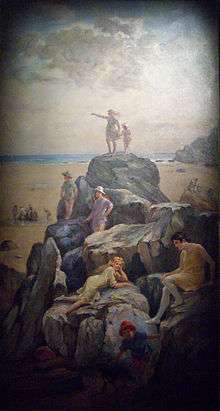 The beach at Carteret by Adolphe Lalyre.