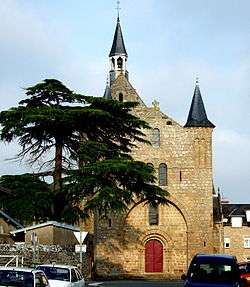 Pontorson is a commune in the Manche department in north-western France. On 1 January 2016, the former communes of Macey and Vessey were merged into Pontorson.[3]

Pontorson is situated about 10 kilometres from the Mont Saint-Michel, to which it is connected by highway and a walking path along the river Couesnon. The river also gives its name to the town's main street.

The town was founded in the 12th century after a vow by William the Conqueror. It was home to a fortress, which was razed to the ground in 1623 by order of King Louis XIII of France.

During World War II, after the liberation of the area by Allied Forces in 1944, engineers of the Ninth Air Force IX Engineering Command began construction of a combat Advanced Landing Ground outside of the town. Declared operational on 10 August, the airfield was designated as "A-28", it was used by the 368th Fighter Group which flew P-47 Thunderbolts until early September when the unit moved into Central France. Afterward, the airfield was closed.[4][5]

Frantz Fanon practiced psychiatry at Pontorson in the early 1950s.

In 1990, Pontorson twinned with the town of Highworth in England. 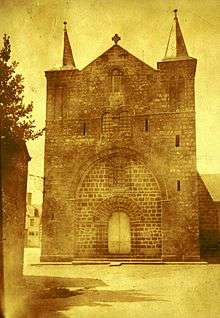 Despite the town's role as a tourist gateway, train services are relatively rare, about three or four per day.