The municipality of Tiruchirapalli was inaugurated by the Town Improvements Act 1865 on November 1, 1866 and included the civil station as well as the Trichinopoly Cantonment. The municipality originally consisted of two ex-officio and nine nominated members.[1] Elections to the council were introduced in 1877 and the first chairman was elected in 1889.[1] Elections were stopped in September 1895 and remained so until July 1897. The appointment of a municipal secretary was sanctioned by the Madras Government in 1898.[1] Following the Montagu–Chelmsford Reforms, an Indian mayor was elected from 1921. The first Indian mayor was probably the Indian national congress independence activist, F. G. Natesa Iyer- who was also an officer with the South Indian Railway Company, the largest industrial enterprise, then in Trichinopoly. [2] Indian independence activist P. Rathinavelu Thevar served as the Chairman of Trichinopoly municipality for a record five terms from 1924 to 1946. Thevar's tenure was, however, highly controversial and he was dismissed in 1934 for administrative irregularities.[3] Thevar's rival T. S. S. Rajan accused him of instigating anti-Brahmin and anti-Muslim violence in the city.[3][4] In 1933 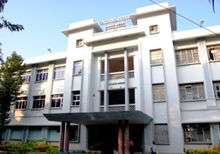 The Tiruchirappalli City Municipal Corporation Council, the legislative body, comprises 65 councillors elected from each of the 65 wards and is headed by the Worshipful Mayor assisted by a Deputy Mayor.[9] The executive wing is made up of seven departments: general administration, revenue, town planning, engineering, public health, information technology and personnel and is headed by a City Commissioner. The Commissioner is assisted by a city engineer, a city health officer, two executive engineers for the east and west sections, and Assistant Commissioners for personnel, accounts and revenue departments, a public relations officer, and an Assistant Commissioner for each of the four zones.[10]

The civic administration of the city is divided into four zones - Abhishekapuram, Ariyamangalam, Golden Rock and Srirangam.[10] The engineering department, however, is divided into two zones - East and West.[10] The zones and the wards which come under each of them have been listed below.

Water supply is provided by the Tiruchirappalli Municipal Corporation.[16] Of the six headworks from which the city gets its water supply, four are maintained by the municipal corporation and the rest by other agencies.[17] Apart from the Gandhi market, Central Bus terminus and the Chathram bus terminus, solid waste management in the city is handled by the corporation.[17] About 400 tonnes of solid waste are released from city every year.[18] The principal garbage dumping ground is at Ariyamangalam.[19] Recently, the Tiruchirappalli city corporation has gone in for scientific closure of the garbage dump and its replacement with a sewage treatment plant.[19] Waste water management in the Trichy-Srirangam under ground drainage (UGD) areas are handled by the Tamil Nadu Water Supply and Drainage Board (TWAD) and in other areas by the Tiruchirappalli Municipal Corporation.[17] The high toxicity of the waste water released by the Trichy Distilleries and Chemicals Limited (TDCL) is a major cause of concern for the corporation.[20] The corporation's annual expenditure for the year 2010-11 is estimated to be Rs. 155.94 crores.[21] The corporation also maintains public parks in Tiruchirappalli city, notable among them being the P. T. Rajan Park, Chinnaswamy Park, Lourdusamy Park, Raja Park, Parangiri Velusamy Park and Ibrahim Park.[22]

The first elections for the post of mayor were held in 1996, two years after Tiruchirappalli's upgradation to a municipal corporation.[23]