Tiruppattur is a town located in Vellore District, India, which is one of the oldest towns in Tamil Nadu. It is located approximately 40 km from Krishnagiri, 85 km from Hosur, 85 km from Thiruvannamalai and 125 km from Bangalore. The town has mainly small-scale industries and mills. It is an important commercial center from time immemorial (whereas Vaniyambadi and Ambur, which were once smaller towns, have recently flourished). It was a revenue subdivision during British raj and remains so. It has Old Shiva, Vishnu temples and Tanks (Big Tank & Small Tank) built during the Hoysala Dynasty. It is well connected by road and rail to other important cities of Tamil Nadu such as Thiruvannamalai, Chennai, Salem, Coimbatore and Vellore and to Bangalore in Karnataka. This town is also famous in Islamic religious circles as many great saints "Awliyas" had made it their home town. Some of them are buried at various places in the town, including Hazrath Syed Sha Mohammed alias Syed Khawja Meeran Hussaini Jaffari, Hazrath Syed ShaAmeenuddin Hussaini Chisty ur Kahdri (who is better known as Munshi Hazrath); he was the last among a series of saints who have lived and have been buried at Tirupattur. As of 2011, the town had a population of 64,125.

The name Tirupattur means a group of ten villages/small towns. There exists a village called Aathiyur (Aathi means Begin) in the southern fringes of the Town and Kodiyur (Kodi means End) in the northern fringes of the town. It is surrounded by several of these villages, making Tirupattur a Taluk. Tirupattur's population and land area are good enough to have political representations in the state legislature of Tamil Nadu (Member of the Legislative Assembly), and part of Thiruvannamalai constituency for the central/federal legislature of India (Member of Parliament as of 2009 elections).

It is known as the "Sandalwood Town" due to the abundant availability of sandalwood trees in the surrounding hills.It is very close to the 4th major hill station of Tamil Nadu, the Yelagiri hills, which is also known as the common man's Ooty.The town is at an average elevation of 388m. The Jawadhi Hills,a part of the eastern ghats lie another to the east of Tirupattur .

Tirupattur town has 56.059 km length of roads and the municipality is maintaining ‘B’ Grade Bus stand in the heart of the town. There is a century old municipal market having 413 shops which helps in promoting commercial and economic activities of the town. This town is known for recording coldest temperature in the Tamil Nadu plains during winter. The seasonal climate conditions are moderate and the weather is uniformly salubrious. The town experiences hot summers and cool winters. The town gets its majority of rainfall during the south west monsoon period. September and October are the wettest months with around 400 mm of rain being received in these two months. The town also experiences fairly frequent thunderstorms in late April and May, which gives necessary relief from the heat, along with the dip in night temperatures. The warmest nights are in May, when the town has an average minimum temperature of 23.4 °C. The coldest nights are in January, when the average minimum temperatures drop to 16.1 °C. May is the hottest month with an average maximum of 37.0 °C. The highest ever temperature recorded in the town is 46.3 °C on 7 May 1976. The lowest ever recorded temperature is 10.2 °C on 15 December 1974. The highest 24‑hour precipitation is 167.3 mm received on 4 November 1966. The average annual rainfall being received in the town is 982 mm. The major group of soils that are found in the town are black and red varieties. The red soil constitutes 90 percent while black soil only 10 percent.

Tirupattur is called as the "Sandal City", Even a rough estimation cannot easily be established on the origin of Tirupattur town, owing to its antiquity.

Through, the inscriptions, so far surveyed by Archaeological Survey of India in Tirupattur, it is estimated that this town is more than 1600 years old. During the regimes of various rulers like Cholas, Vijaya Nagara Dynasty, Hoysalas the town had been referred to, by the following names: Sri Mathava Chaturvedi Mangalam,Veera Narayana Chaturvedi Mangalam, Tiruperur and Brahmapuram (Brahmeeswaram). The present name "Tirupattur" might have got derived from "Tiruperur". Erstwhile "Tiruperur" or "Sri Madhava Chaturvedi Mangalam" was in "Eyyil Nadu", subdivision of "Nigarili Chola Mandalam", division of "Chola Empire". There existed a fort in the eastern part of the town around 800 years ago. Its entrance might have been near the Kottai Darwaja Sri Veera Anjaneyar Temple, since the word "Kottai" in Tamil means "Fort", and the word "Darwaja" in Hindi/Urdu means "Gate" or "Door". The area is still known as "Kottai"(fort).The well known Anesthesiologist Dr.Vasudevan Jagannathan studied in Government Boys higher secondary school , Tirupattur during 1986-87. The Town was ruled by Cholas, Pallavas, Hoysalas, Vijaya Nagara rulers, Vallala Maharajan, Sambuvarayars, Tipu, Nawabs of Arcot and undoubtedly by the British. This city is a home for many sufi saints who had been buried in and around. the last known Sufi was Hazrath Syed Sha Ghouse Muhayeedeen Hussaini Rahmatullahi alai, famously known as "Ghouse peeran saheb". 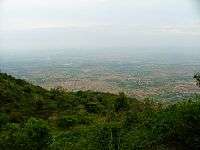 A view from yelagiri

Yelagiri is a hill-station on the Vaniyambadi-Tirupattur Road, midway between Chennai and Bangalore. Located at an altitude of 1,050 metres (3,500 ft) and spread across 30 km2, the Yelagiri village (also spelt Elagiri at times) is surrounded by orchards, rose-gardens, and green valleys. Vainu Bappu Observatory, Sri vetkaaliamman temple(142 feet height)(13 km) kandhili, Bheeman Falls(38 km from Tirupattur)Jalagamparai Falls (14 km from Tirupattur) are other prominent tourist destinations around the town. Jalagamparai waterfalls is found on the eastern slope of the Yelagiri hills. The Javadi Hills are located about 35 km from Tirupattur. In the middle of this hill, lies the Kavalur Observatory, which has several optical and reflective telescopes run and governed by the Indian Institute of Astrophysics.

The Tamil Nadu state Bus transport corporation (TNSTC) is providing 85% of transport facilities to this town. Tirupattur is well connected by road and rail to major cities of India. Regarding transportation linkage, the highway (NH 46) from Chennai to Krishnagiri (via) Natrampalli passes through the outskirts of the town. The town is separated by a distance with Chennai (225 km), Bangalore (130 km), Vellore (87 km) and Salem (108 km). Several State Highways connects the town from Dharmapuri (60 km), Krishnagiri (40 km) Vaniyambadi (22 km), Harur (47 km) and Salem (108 km) section. TNSTC also operates luxury Volvo A/C buses (Route no:502B) to Chennai daily. Frequent buses are there to Chennai, Vellore, Harur, Salem, Bangalore, and Villupuram.

Tirupattur Railway Station is under the administrative control of the Southern Railways. It is 2 km away from bus stand. Traveling north, Jolarpettai Junction (8 km) is the nearest junction, and going south-west, Morappur is the next station. Due to proximity to the Jolarpet Railway Junction only few express trains halt here.

The nearest airports are at Salem (105 km) and Vellore Air Strip (85 km), while the nearest international airports are located at Bengaluru (135 km) and Chennai (225 km).