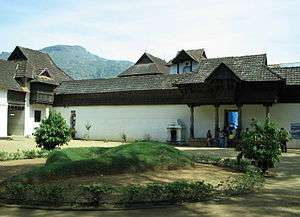 Padmanabhapuram (Tamil:பத்மனாபபுரம், Malayalam: പദ്മനാഭപുരം) is a city and a municipality near Thuckalay in Kanyakumari district in the Indian state of Tamil Nadu. As of 2011, the town had a population of 21,342.

The popular Padmanabhapuram Palace, the old palace of the Travancore kings, is also located here. It is spread over an area of 6 acres (24,000 m2). The palace is known for it antiques, including the armoury of the royal family. The woodwork in this palace is intricate. This Palace is maintained by the Govt.of Kerala Archaeology Department.

Other tourist locations include Thirparappu Waterfalls,Hanging Bridge in Mathoor, Ancient Jain Temple in Chitharal (a small village situated at a distance of 8 km from Marthandam.) Thiruvalluvar Statue in Kanniyakumari. One can take a bus from Thiruvananthapuram or Nagercoil and get down at Thuckalay, which is two kilometres away from Padmanabhapuram. The nearest places around this old capital city of South travancore is Marunthukottai (It is a very old fort having weapons storage facility), Saralvilai, Kumarakoil (Lord.Murugan Temple), Moolachel, Charode, Manali, Udaygiri fort ...