Vandavasi or Wandiwash is a city and a municipality in Tiruvanamalai district in the Indian state of Tamil Nadu. As of 2011, the town had a population of 31,320.

Vandavasi was the scene of a decisive battle in the 18th-century war between France and the United Kingdom for the control of South Asia. The Battle of Wandiwash was a watershed in Indian history as it cemented British supremacy in South Asia. On January 22, 1760, a British force led by Eyre Coote defeated a French force led by General Thomas Lally.

As a capital town

According to one version, Chennapattanam, now called Chennai (British Madras), was named after Damera Chennappa Nayaka, the Nayaka of Kalahasthi and Vandavasi, father of Damera Venkatappa Kayaker (padmanayaka velama ruler) from whom the English acquired the town in 1639. The ruler of the area, Chennapa Nayak, the Nayaka of Vandavasi, granted the British permission to build a factory and warehouse for their trading enterprises. The region was then primarily a fishing village known as "Madraspatnam".

Vandavasi fort would have been a famous tourist spot but for its negligence by the authorities. It witnessed the decisive Battle of Wandiwash, it even is said to have an underground passage to Gingee fort. The Nayak of Vandavasi, a vassal of Vijaynagara Kings was instrumental in helping British secure grant from Chandragiri Fort to build the city of Madras. 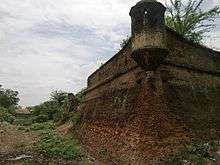 Arahanthgiri Jain Math is a Jain Math that was established at the ancient Jain site of Tiruvannaamalai in August, 1998.[7] The complex includes 3 Jain caves, 4 Jain temples and a 16 meter high sculpture of Neminatha thought to date from the 12th century that is the tallest Jain image in Tamil Nadu.