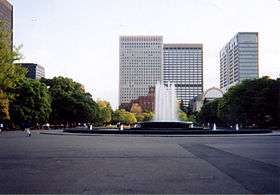 Hibiya (日比谷) is a geographic name covering a part of Chiyoda Ward in Tokyo. The area along Hibiya Street (National Route 1) from Yūrakuchō to Uchisaiwaichō is Hibiya district. Hibiya is used in some local place names such as Hibiya Park and Hibiya Station. Hibiya was a ward named Kōjimachi before Tokyo City was restructured. The outskirts of this district are reclaimed from the ocean, so the name of "hibi" of Hibiya is derived from the facility for the laver of nori made of bamboo whose name is also "hibi".

In the era of Tokugawa shogunate, the Tokugawa bakufu worked out of Edo castle and the area surrounding Edo castle was developed and landfilled and the fishing village became an urban area where many Daimyō live.

After the end of the Meiji Restoration Hibiya, the city of Tokyo had become a modern city for there were many buildings including the Imperial Hotel (Tokyo's first western hotel), Rokumeikan, Tokyo city hall and the Tokyo Club. In the 1930s, the first Japanese electric traffic light appeared at a Hibiya crossing point. The once fashionable district has changed into a business street.

This article is issued from Wikipedia - version of the 6/16/2015. The text is available under the Creative Commons Attribution/Share Alike but additional terms may apply for the media files.