For other uses, see Kagurazaka (disambiguation). 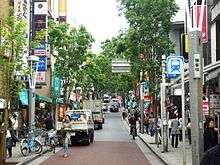 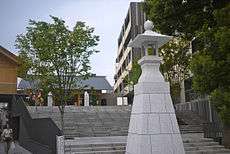 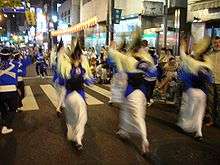 Kagurazaka (神楽坂) is a neighbourhood in Tokyo, near Iidabashi Station. It has a shopping street at its center, lined by numerous cafés and restaurants. It is served by Tokyo Metro Tozai Line and Toei Oedo Line.

The main road of Kagurazaka was once at the outer edge of Edo Castle, opposite the Ushigome bridge over the castle moat, and has always been busy because of this privileged location.[1] In the early 20th century, the area was renowned for its numerous geisha houses, of which several remain today. Currently, Kagurazaka is experiencing a popularity boom due to its traditional, sophisticated atmosphere on the edge of modern Shinjuku ward, the existence of the original campus of Tokyo University of Science and its proximity to Waseda University. The area is also home to a number of publishing houses.

View of Kagurazaka and Ushigome bridge to Edo Castle (牛込神楽坂の図) by Utagawa Hiroshige, 1840. 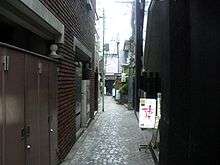 An old backstreet in Kagurazaka.

Kagurazaka is also widely regarded as an important center of Japanese cuisine within the Kanto region. Several old and famous "ryōtei" are to be found in the winding back streets, often accessible only by foot. These ryotei provide expensive "kaiseki" cuisine, which is generally regarded as the pinnacle of Japanese food. Ryotei also allow diners to invite geisha to provide entertainment during the course of the evening. Many shops in the area cater to this culture, especially selling kimono, Japanese sweets, and tea.

The Kagurazaka Awa Odori (Japanese: 阿波踊り) festival is held the fourth Friday and Saturday each July. Awa Odori is the famous festival from Tokushima. The Kagurazaka connection to the dance goes back to the Edo era, when the Tokugawa daimyo donated the Ushigome Mitsuke. This is the fortified gate at at the bottom of the Kagurazaka hill, on the opposite side of the canal. Today, only its foundations remain, and can be found just to the south of JR Iidabashi station.

Akagi Shrine (Akagi Jinja/赤城神社) was formerly found at the top end of Kagurazaka. It was recently redeveloped with a new shrine and apartment complex, designed by world-renowned architect Kengo Kuma, and opened to the public in September 2010.