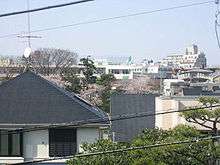 A typical view in Den-en-chōfu

Den-en-chōfu (田園調布), meaning "garden suburb of Chōfu," is a district in Ōta Ward in southern Tokyo. It lies along the Tama River, the natural border between Tokyo and Kawasaki, Kanagawa. It is served by Den-en-chōfu Station on the Tōkyū Tōyoko and Meguro lines. Den-en-chōfu includes many detached suburban homes with a variety of styles, including Japanese neo-classical, Edwardian villas, Swiss cottages and modern architectural designs.

Den-en-chōfu was built based on the "Garden City" idea originally developed by the British city planner Ebenezer Howard.[1] It is one of the most famous and top-class residential towns where many executives have their dwellings. Being 10 km away from the center of Tokyo, the area contains natural parks. The area has its own regulations for construction in order to preserve the town feel to the area. The residences are fairly big compared to normal housing in other areas in Japan, and the district is often compared to Beverly Hills in Los Angeles, U.S.A.

Den-en-chōfu was planned as a garden suburb of Tokyo. In the early 1900s, financier Eiichi Shibusawa bought, named and developed the area by emulating the garden suburbs that were growing in metropolitan areas around the world, particularly those in Greater London.[2]

Although the area was developing at an adequate pace, it was the Great Kantō Earthquake of 1923 that guaranteed his success. Central Tokyo was leveled in the earthquake, but Den-en-chōfu was virtually untouched; in the aftermath, the exodus of people from the central city to the less crowded, cleaner suburbs ensured that the Den-en-chōfu would prosper. 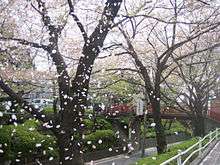 Today, residents of Den-en-chōfu and the surrounding areas seem to benefit from Shibusawa's original plan. Its success has influenced neighbouring areas along Tōkyū railway lines in western Meguro, including the Yakumo, Kakinokizaka, Nakane, Okusawa and Jiyūgaoka neighbourhoods.

Den-en-chōfu is known as a very expensive area to live in with houses that are large by Tokyo standards. The most exclusive area is Den-en-chōfu 3-chōme, which is laid out like the spokes of a wheel on the western side of Den-en-chōfu station. Owing to the size of the houses, tree-lined streets and public parks and gardens, it is also a popular area for expatriate families. It is close to a number of international schools (Seisen and St Mary's) and is on the bus route for the German school in Yokohama. A number of "expatriate-friendly" supermarkets are also nearby, selling many foreign comestibles (Den-en Super and Precce).

Well-known residents of the area include: