"Electric Town" redirects here. It is not to be confused with Electric City (disambiguation). 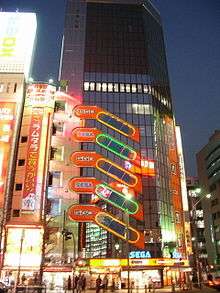 GiGO, a Sega arcade in Akihabara

Akihabara (秋葉原) is a district in the Chiyoda ward of Tokyo, Japan. The name Akihabara is a shortening of Akibagahara (秋葉が原, "autumn leaf field"), which ultimately comes from Akiba (秋葉), named after a fire-controlling deity of a firefighting shrine built after the area was destroyed by a fire in 1869.[1]

Akihabara gained the nickname Akihabara Electric Town (秋葉原電気街, Akihabara Denki Gai) shortly after World War II for being a major shopping center for household electronic goods and the post-war black market.[2][3] Nowadays, Akihabara is considered by many to be an otaku cultural center and a shopping district for video games, anime, manga, and computer goods. Icons from popular anime and manga are displayed prominently on the shops in the area, and numerous maid cafés are found throughout the district.

The area that is now Akihabara was once near a city gate of Edo and served as a passage between the city and northwestern Japan. This made the region a home to many craftsmen and tradesmen, as well as some low class samurai. One of Tokyo's frequent fires destroyed the area in 1869, and the people decided to replace the buildings of the area with a shrine called Chinkasha (now known as Akiba Shrine (秋葉神社, Akiba Jinja)), meaning fire extinguisher shrine, in an attempt to prevent the spread of future fires. The locals nicknamed the shrine Akiba after the deity that could control fire, and the area around it became known as Akibagahara and later Akihabara.[1][2] After Akihabara Station was built in 1888, the shrine was moved to the Taitō ward where it still resides today.[4][5][6] 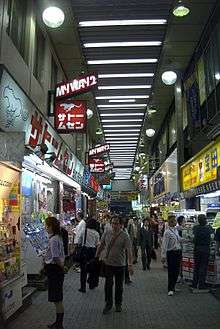 Between stores in Akihabara

Since its opening in 1890, Akihabara Station became a major freight transit point, which allowed a vegetable and fruit market to spring up in the district. Then, in the 1920s, the station saw a large volume of passengers after opening for public transport, and after World War II, the black market thrived in the absence of a strong government. This disconnection of Akihabara from government authority has allowed the district to grow as a market city and given rise to an excellent atmosphere for entrepreneurship.[3] In the 1930s, this climate turned Akihabara into a future-oriented market region specializing in household electronics, such as washing machines, refrigerators, televisions, and stereos, earning Akihabara the nickname "Electric Town".[2][7]

As household electronics began to lose their futuristic appeal in about the 1980s, the shops of Akihabara shifted their focus to home computers at a time when they were only used by specialists and hobbyists. This new specialization brought in a new type of consumer, computer nerds or otaku.[2] The market in Akihabara naturally latched onto their new customer base that was focused on anime, manga, and video games. The connection between Akihabara and otaku has survived and grown to the point that the region is now known worldwide as a center for otaku culture, and some otaku even consider Akihabara to be a sacred place.[8]

On Sunday, June 8, 2008 at 12:33 JST, a man drove into a crowd with a truck, then stabbed at least 17 people using a dagger. Seven died and ten were injured. Tokyo Metropolitan Police Department arrested Tomohiro Katō (加藤 智大, Katō Tomohiro), 25, on suspicion of attempted murder, later being re-arrested weeks later on suspicion of murder. Kato was eventually sentenced to death by the Tokyo District Court in 2011, and the sentence was upheld on appeal in 2012. 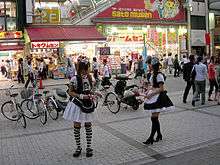 The influence of otaku culture has shaped Akihabara's businesses and buildings to reflect the interests of otaku and gained the district worldwide fame for its distinctive imagery. Akihabara tries to create an atmosphere as close as possible to the game and anime worlds of customers' interest. The streets of Akihabara are covered with anime and manga icons, and cosplayers line the sidewalks handing out advertisements, especially for maid cafés. The idol group AKB48, one of Japan's highest selling contemporary musical acts, runs its own theater in Akihabara, from which the group's name is derived. 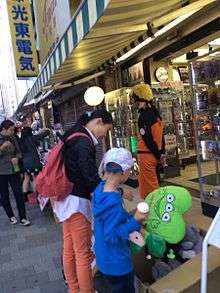 Naruto cosplayer attracting customers for a Manga and Anime shop

Release events, special events, and conventions in Akihabara give anime and manga fans frequent opportunities to meet the creators of the works they follow so closely and strengthen the connection between the region and otaku culture. The design of many of the buildings serves to create the sort of atmosphere that draws in otaku. Architects design the stores of Akihabara to be more opaque and closed to reflect the general desire of many otaku to live in their anime worlds rather than display their interests to the world at large.[2][9]

Akihabara's role as a free market has also allowed a large amount of amateur work to find a passionate audience in the otaku who frequent the area. Doujinshi, amateur manga (or fanmade manga based on an anime/manga/game) has been growing in Akihabara since the 1970s when publishers began to drop manga that were not ready for large markets.[2]