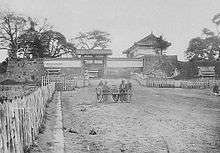 Yotsuya is located in the southeastern part of Shinjuku. Prior to 1943, when Tokyo was still a city, Yotsuya was one of its wards and had definite boundaries, but it is less clearly defined today. Yotsuya is generally defined as coinciding with the responsibility area of the Shinjuku City Yotsuya Branch Office and the Yotsuya Police Station, which includes most of Shinjuku east of Meiji-dōri and south of Yasukuni-dōri. To the east lies the neighborhoods of Banchō in Chiyoda.

A place within Shinjuku, also named Yotsuya, is located immediately west of Yotsuya Station; it is divided into four chōme.

Before the growth of Edo, Yotsuya was a farming village outside the city. In 1634, with the digging of the outer moat around Edo Castle, many temples and shrines moved to Yotsuya. The moat had stone walls, and a mitsuke, or watch tower, was also built. Yotsuya Mitsuke stood near the present-day Yotsuya Station.

The relocation of the temples and construction of the mitsuke brought settlements of workers, and following the devastating Meireki fire, many more people moved to Yotsuya, which had been spared. Gradually the area became part of the city of Edo.

In 1695, the shogun Tokugawa Tsunayoshi ordered the establishment of a vast kennel. The purpose was to board stray dogs as part of his policy of showing mercy to animals. The facility outside the Yotsuya Gate occupied 20,000 tsubo (66,000 m2; 710,000 sq ft).

Yotsuya developed rapidly due to its central location. In 1894, the Kōbu Railway, predecessor of the present-day Chūō Line, extended its existing railway line between Shinjuku and Tachikawa to Ushigome and opened Yotsuya and Shinanomachi stations. The railway enabled the easy transport of raw materials into the area; soon, pencil, tobacco and other industries moved in and began Yotsuya's rapid industrial development.

Many historic temples and graves are located in Yotsuya. Among them are Sainen-ji, where the grave of the ninja Hattori Hanzō and his lance are interred.

Prime Minister Saito Makoto lived in Yotsuya. He was assassinated at his home on February 26, 1936. This was one of the events of the February 26 Incident.

Other famous residents, past and present, include:

Yotsuya has figured prominently in various works of fiction. The kabuki play Yotsuya Kaidan took place there, as did the novel Teisō Mondō by Kan Kikuchi. Yotsuya was the setting for the Shōtarō Ikenami historical novel Kenkaku Shōbai and the jidaigeki television series based on it. It was also featured in the novel Norwegian Wood by Haruki Murakami. The manga/anime series Maison Ikkoku has a supporting character named Yotsuya. It is unknown whether or not this is his real name.