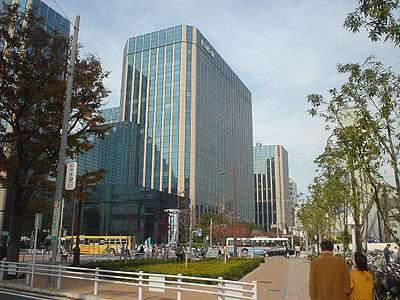 Ōmori (大森) is a district located a few kilometres south of Shinagawa, Tokyo, Japan accessed by rail via the Keihin Tohoku line, or by road via Dai Ichi Keihin. Ōmorikaigan, the eastern area of Ōmori, can be reached via the Keikyu line.

Ōmori is one of many areas in Tokyo's largest ward, Ota-ku, and was formerly home to the German International School before its relocation to Yokohama. High quality residential and retail developments that the German school attracted are present in the Ōmori-sannō area. Ōmori is home to the headquarters of the automotive company Isuzu, which has offices in the Belport complex a few hundred metres from Ōmori station.

Prior to its development as a convenient residential and business location, Ōmori was laced with a network of small rivers which were used by many locals for drying harvested nori (seaweed), a staple of the Japanese diet. Modern Ōmori is built on mostly reclaimed land, and is very much a traditional Shinto area; there are many shrines in the area, and during the August o-bon festival, mikoshi parades are very common.

Ōmori-sannō, to the west of Ōmori station, is an upscale neighbourhood compared to the other side of the tracks, and Ōmori-sannō is known to be traditionally an area where Japanese poets, philosophers and writers have made their home.

Ōmori was the site of an army-administered prisoner-of-war camp during World War II. The inhumane conditions in the camp were described in detail in the award winning book Unbroken: A World War II Story of Survival, Resilience, and Redemption describing the life of American Olympic Athlete Louis Zamperini.The camp was brutal and included in its staff known war criminal Mutsuhiro Watanabe. However, US Navy submarine commander Richard O'Kane found Omori camp harsh but essentially correct in administration, particularly compared with the Ōfuna navy detention centre. Local anti-militarist Japanese civilians sometimes helped the prisoners with small gifts of food.[1]

While Ōmori station opened in 1876 and is widely known to outsiders, the "town of Ōmori" was renamed in 1970 and is less known, and even local residents are often confused. Broadly, the west side of JR Ōmori station is still Ōmori but generally speaking it is considered Sannō area, an uptown. 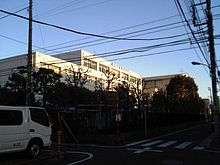 This article is issued from Wikipedia - version of the 1/13/2016. The text is available under the Creative Commons Attribution/Share Alike but additional terms may apply for the media files.