Iidabashi (飯田橋, Iidabashi) is a district of Chiyoda, Tokyo, Japan. It was in the former ward of Kōjimachi, which existed in Tokyo until 1947. Its postal code is 102-0072. 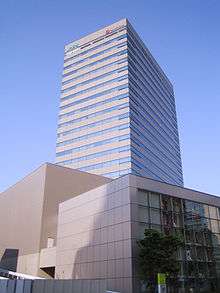 Several companies have their headquarters in Iidabashi, among them Japan Freight Railway Company,[1] KDDI[2] Nikken Sekkei,[3] and Shohakusha.[4]

This article is issued from Wikipedia - version of the 5/29/2015. The text is available under the Creative Commons Attribution/Share Alike but additional terms may apply for the media files.