For the burial place of Enomoto Takeaki, see Kisshō-ji.

Kichijōji Station (in back). A pink Moo-bus, a Musashino city bus, waits for passengers.

Kichijōji (吉祥寺) is a neighborhood in the city of Musashino in Tokyo, Japan. It is centered on the commercial area to the north of its train station and has a youthful, artistic, slightly countercultural reputation. Kichijōji Station is served by the Chūō Line, Sobu Line, Tozai Line and is also a terminus of the Keiō Inokashira Line, which takes passengers as far as Shibuya. The area is one of the most popular areas for younger people to spend their weekend, because it features one of Tokyo's most varied and complete shopping areas, as well as the almost constantly crowded Inokashira Park together with its zoo. Supporting the fact of its popularity is that it's been voted to the number 1 place every year where people in Japan wish they would live since poll started in 2004.[1]

The neighborhood is dominated by a shopping district centered on a covered street, Sun Road, which extends from Kichijōji Station to the north. This well organized and clean area includes amenities, shops, entertainment and restaurants.

Half way up this shopping street is the Buddhist temple Gessō-ji (月窓寺), with graveyard, and at the northern end of it are Shinto shrines, the latter holding the occasional festival, with amusements such as fishing for gold fish, sweet food stalls, and typical dishes.

On the north, east, and south sides of the station is a large nightlife area with many restaurants, bars, izakaya, and "live" houses. On the north-east side of the station lies a red-light district on the Chūō Line between Tachikawa and Shinjuku, containing numerous cabarets, bars, and pink salons.

The anime and manga companies Coamix and Bee Train have their headquarters in Kichijōji.[2] Studio Ghibli was previously located in Kichijōji.[3] 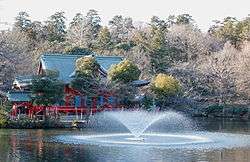 The Temple in Inokashira park

Inokashira Park, the source of the Kanda River (神田川 Kanda-gawa), is located south of Kichijōji Station, and is a favorite spot for springtime hanami, or cherry-blossom viewing. Public-opinion surveys consistently designate Kichijōji one of Tokyo's most desirable residential neighborhoods.[4] It features a large center lake, petting zoo, small cafes, food vendors, and street performers around the perimeter of the park. Nearby is the Ghibli Museum, which is part of the neighboring city Mitaka.

Seikei University (成蹊大学) is a private university in the northwestern area of the district. It is part of a wider educational institute—an escalator school—which teaches from elementary school right through to university level, and is situated amongst rows of large trees in that area of Kichijōji.