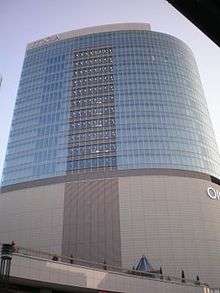 Yūrakuchō (有楽町) is a neighborhood of Chiyoda, Tokyo, Japan, situated in between the Ginza and Hibiya Park, near the neighborhood of Shinbashi. Unlike its tonier neighbor Ginza, Yūrakuchō provides a glimpse of Japanese life from the early postwar period, with its many izakaya (Japanese-style bars, denoted by their red lanterns known as akachochin) and outdoor yakitori restaurants, many of which are located under the train tracks serving Tokyo's JR Yamanote Line. Because of its many traditional Japanese-style eating establishments, as well as its location on the Yamanote Line with easy access to Tokyo Station, Yūrakuchō is a favorite drinking spot for businessmen on their way home from work.

The neighborhood takes its name from Oda Nagamasu (or Urakusai, 1547–1622), younger brother of Oda Nobunaga. Nagamasu built his mansion here on land near the Sukiya-bashi Gate of Edo Castle granted by Tokugawa Ieyasu.

In 1707, the Tokugawa shogunate established the Minami-machi Bugyō-sho, the office of one of the magistrates of Edo, in this area.

The place name dates from the Meiji period. It arises from an altered pronunciation of Urakusai. 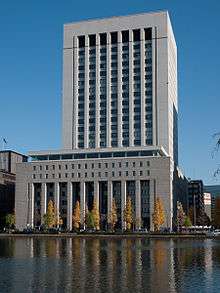 The DN Tower 21 incorporates the building Douglas MacArthur used as the headquarters of SCAP.

One of the landmarks in Yūrakuchō is the DN Tower 21. Home of the The Dai-ichi Mutual Life Insurance Company, the building, across the moat from the Imperial Palace, was the headquarters of Supreme Commander of the Allied Powers under Douglas MacArthur during the Occupation of Japan. Norinchukin Bank shares the facility.

The Yūrakuchō Center Building (Yūrakuchō Mullion) complex, featuring retail, 7 movie theaters, convention halls, and parking, is also located here. The neighborhood has many theatres and cinemas, among them the Tokyo International Forum, Toho Imperial Theater, Nissei Theater, Marunouchi Tōei, Chanter, Tokyo Takarazuka Theater, Scala-za and Miyuki-za. The Hibiya Mitsui houses the home offices of the Sumitomo Mitsui Banking Corporation, Japan Steel Works, and Asahi Kasei, while the Shin Yūrakuchō Building is home to Asahi Glass Co., Nippon Paper Industries, and Nichiro Corporation. Toyota Tsusho and Toho have their headquarters in the neighborhood, and the Japan National Tourist Organization (JNTO) has both its headquarters and a Tourist Information Center in Yūrakuchō. The Foreign Correspondents' Club of Japan has its facilities in the Yūrakuchō Denki North Building.

Japan Airlines operates a domestic and international flights ticketing office on the first floor of the Yurakucho Denki Building in Yūrakuchō.[2]