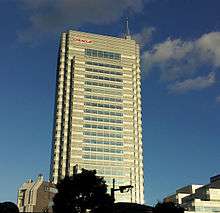 Yōga (用賀, Yōga) is a neighborhood in Setagaya, Tokyo.[1] Its name appears frequently in traffic reports because the junction between the Tomei Expressway and the elevated Shibuya branch (#3) of the Metropolitan Expressway system is there. There is also a stop, Yōga Station, on the Tōkyū Den-en-toshi subway line here. There is also a bus services (Tokyu Bus) and possible access to the area with numbers of buses.

Two traffic cameras on top of the SBS tower overlook the junction, the Yōga toll gate, and other parts of the neighborhood.

Several major offices are in Yōga:

In the Edo period, Yōga was a post-town on the Ōyama Kaidō, a road connecting Edo and Ōyama Mountain in Sagami Province.[1]

Yōga is home to Kinuta Park, a broad green space established in 1957. The park is located 10 minutes from the Yōga Station and covers 39 hectares (96 acres). Kinuta Park has sports facilities, including baseball fields, a basketball court, and swimming pools (25m and 50m, also a small pool for kids and diving pool).[2] The Setagaya Art Museum, est. 1986, is located on a corner of Kinuta Park. The museum has a permanent collection with an emphasis on photography, particularly the works of Kineo Kuwabara and Kōji Morooka.[3]

Yōga is noted for its educational institutions, and his home to many primary, junior, and high schools. Perhaps the most significant of them all is Sakuramachi State Primary, which had biggest numbers of pupils in Setagaya-ku back in 1992-93 with more than 600 pupils.

Around the Yoga station is perhaps the most vibrant area of Yoga. It is a residential area after all and there are numbers of residential friendly facilities including large super markets (OK Store and Fuji supermarket) as well as smaller grocery stores, butcher, off-licence, fish shops, etc.