For the woman who was considered to be the oldest person on Earth, see Kamato Hongo. For the videogame character Hongo the Book Spirit, see Yoshi's Universal Gravitation. 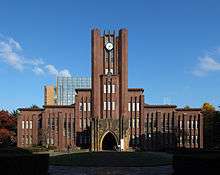 Hongō (本郷) is a district of Tokyo located in Bunkyō-ku (Bunkyo Ward), due north of the Tokyo Imperial Palace and west of Ueno. Hongō was a ward of the former city of Tokyo until 1947, when it merged with another ward, Koishikawa, to form the modern Bunkyō.

Hongō is home to the University of Tokyo, Juntendo and Toyo Gakuen Universities. There are many schools and universities in this ward and it has been regarded as a school zone since Meiji era. Hongō-sanchōme Station (Marunouchi Line and Toei Oedo Line) is in the center of this Ward, which is main station of this ward.

This was where Yaoya Oshichi, a greengrocer's daughter who was burned at the stake for arson in 1683, lived.