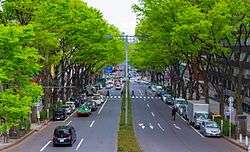 Omotesandō street as seen from an overpass

Omotesandō (表参道) is a zelkova tree-lined avenue located in Shibuya and Minato, Tokyo, stretching from the entrance to the Meiji Shrine, to Aoyama-dori where Omotesando Station can be found.

Omotesandō was originally created in the Taishō era as the frontal (表, Omote) approach (参道, Sandō) to Meiji Shrine, dedicated to the deified spirits of Emperor Meiji and his wife, Empress Shōken.[1][2]

Today, Omotesandō is known as one of the foremost 'architectural showcase' streets in the world, featuring a multitude of fashion flagship stores within a short distance of each other. These include the Louis Vuitton store (Jun Aoki, 2002) Prada building (Herzog & de Meuron, 2003), Tod's (Toyo Ito, 2004), Dior (SANAA, 2004), Omotesandō Hills (Tadao Ando, 2005) and Gyre (MVRDV, 2007), amongst others.

Omotesandō is the main vehicle and pedestrian thoroughfare for the shopping district commonly referred to as Harajuku. The area features many international brand boutiques, ranging from high end stores such as Louis Vuitton, Alexander McQueen and Gucci to Fast fashion retailers such as Gap, H&M and Zara. Omotesandō is one of two locations in Tokyo, considered by Chevalier to be the best location for a luxury-goods store.[3] Omotesandō is also home to the Kiddyland toy store, Laforet a shopping center geared primarily toward young women, and the Oriental Bazaar, a general merchandise store popular with international tourists. It is sometimes referred to as "Tokyo's Champs-Élysées". Its latest development, Omotesandō Hills, opened in 2006. Omotesandō's side streets known as Ura-Harajuku, feature a range of smaller cafes, bars, and restaurants, as well as boutique stores specialising in everything from handbags to postcards to vintage glass bottles.

Every year, Omotesandō is the venue for Tokyo's Saint Patrick's Day Parade.[4]