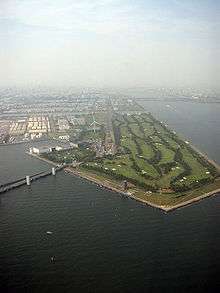 Wakasu (若洲) also Wakasu Island, is an island located in Koto, Tokyo. It is located south of Shin-Kiba and is connected to a new unnamed island to the south by the Tokyo Gate Bridge.

Wakasu, like many other areas of Tokyo, is reclaimed land. Save for the camping ground, Wakasu was constructed on a base of trash, a form of land reclamation common in Japan.

Roughly half of the island is an industrial zone, while the other half contains the Wakasu Seaside Park[1][2] Wakasu Golf Course[3] and a popular camping ground.[4] There is also a large wind turbine located nearby the golf course. The 18-hole golf course and the campground attract many people from all over Tokyo.

Wakasu was planned to be the venue for sailing events at the 2020 Summer Olympics.,[5] but as of 2015 it is planned that the yachting will take place in Enoshima, Kanagawa Prefecture.[6]