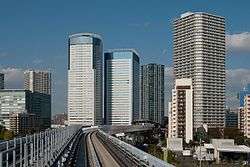 The area of Toyosu was created in 1937 on reclaimed land.[1] Toyosu was chosen by former Governor of Tokyo Shintarō Ishihara for relocating Tsukiji fish market, but there was a longstanding controversy over this plan due to the toxic contamination of the chosen relocation area.[2] The move to Toyosu was planned to take place in November 2016, in preparation for the 2020 Tokyo Summer Olympics,[3] but on August 31, 2016, the move was postponed.[4] There are plans to retain a retail market, roughly a quarter of the current operation, in Tsukiji.[5]