Lee's Summit is a city located within the counties of Jackson (primarily) and Cass in the U.S. state of Missouri. As of the 2010 census its population was about 91,364, making it the sixth-largest city in both the state and in the Kansas City Metropolitan Area.[7] In 2006, CNN/Money and Money magazine ranked Lee's Summit 44th on its list of the "100 Best Cities to Live in the United States."[8] That ranking improved to 27th on the 2010 list.[9] 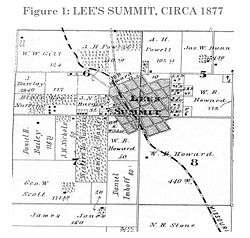 Lee's Summit circa 1877. From the 1877 Illustrated Historical Atlas of Jackson Co. Missouri.

Founded as the "Town of Strother", by William B. Howard for his wife, Maria D. Strother (daughter of William D. Strother formerly of Bardstown, Kentucky). Howard came to Jackson County in 1842 from Kentucky, married Maria in 1844, and by 1850 he and Maria had 833 acres (3.37 km2) and a homestead five miles (8 km) north of town. He was arrested for being a Confederate in October 1862, near the beginning of the Civil War, and after being paroled he took his family back to Kentucky for the duration of the war. After the war ended he returned and, knowing that the Missouri Pacific Railroad was surveying a route in the area, platted the town with 70 acres (280,000 m2) in the fall of 1865 as the town of Strother.[10][11]

In 1865 the town of Strother changed its name for early settler Dr. Pleasant John Graves Lea, who moved to Jackson County in 1849, from Bradley County, Tennessee. Lea was listed as the postmaster of Big Cedar in the 1855 United States Official Postal Guide.[12] Dr. Lea was killed in August 1862 by Kansas Jayhawkers (or Redlegs).[13]

When the surveyors for the Missouri Pacific Railroad came through, the local people and the railroad wanted to name the town in Dr. Lea's honor. He had a farm on the highest point and near the path of the tracks, and his murder had taken place near the site of the proposed depot. So they chose the name of "Lea's Summit", the "summit" portion to reflect its relatively highest elevation on the Missouri Pacific Railroad between St. Louis and Kansas City.[14] But they misspelled the name "Lees Summit" (with two "e's"; "Lee" instead of "Lea"; and leaving out the apostrophe) on a boxcar that was serving as a station and donated by the Missouri Pacific,[15] then a sign next to the tracks, and finally in the printed time schedule for the railroad.[16] Also the name was misspelled on the stone culvert near the station, on the side of the Missouri Pacific depot, but on the other side it was spelled correctly, accordingly the railroad used this spelling, as did travelers.[17][18]

Others, those with Southern sympathies, claim that the town was named after famed Civil War General Robert E. Lee after Southerners began moving north into Missouri after the war.[10][14] Attributed to a misquote in the Louisville Journal, January 3, 1866.[16]

Since the name was already being circulated and published with two "e's", the town petitioned the state legislature and incorporated its name in 1868 as: "Town of Lee's Summit".[10][14]

Growth of the town can be studied through historic Sanborn Maps, which document building types and uses in the city during the late nineteenth and early twentieth centuries.[19]

In 1912, R.A. Long, the owner of a lumber company, began building his estate, named Longview Farm, on the western edge of the city and into part of Kansas City. When complete, it had a mansion, five barns and 42 buildings in the 1,700 acres (6.9 km2). (Moses Metheny, the great-grandfather of jazz legend Pat Metheny, was a co-founder.) The farm also had a church, Longview Chapel Christian Church, which was completed in 1915. It soon became internationally known as a showplace farm. Today, one of the horse barns is home to Longview Farm Elementary, and the site of Longview Community College. The church and mansion are on the National Register of Historic Places. Other parts of the farm have been turned into Longview Lake, Longview Community College, and a development called New Longview.[10][14]

Lee's Summit is also home to:

The location of Lee's Summit in relation to counties and state

There were 34,429 households of which 39.5% had children under the age of 18 living with them, 58.3% were married couples living together, 10.9% had a female householder with no husband present, 3.8% had a male householder with no wife present, and 27.0% were non-families. 22.8% of all households were made up of individuals and 8.9% had someone living alone who was 65 years of age or older. The average household size was 2.63 and the average family size was 3.11.

There were 26,417 households out of which 40.8% had children under the age of 18 living with them, 62.1% were married couples living together, 8.9% had a female householder with no husband present, and 26.2% were non-families. 22.0% of all households were made up of individuals and 9.2% had someone living alone who was 65 years of age or older. The average household size was 2.65 and the average family size was 3.12.

The Historic Jefferson Highway (known as the "Palm to Pine" highway) runs through town. 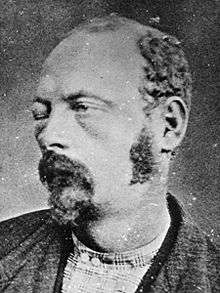 Cole Younger after the 1876 Northfield Raid