Devapiran Perumal Temple in Tholavillimangalam, a village in Thoothukudi district in the South Indian state of Tamil Nadu, is dedicated to the Hindu god Vishnu. It is located 22 km from Tirunelveli. Constructed in the Dravidian style of architecture, the temple is glorified in the Divya Prabandha, the early medieval Tamil canon of the Azhwar saints from the 6th–9th centuries AD. It is one of the 108 Divyadesam dedicated to Vishnu, who is worshipped as Devapiran and his consort Lakshmi as Karunthadankanni.[1] The temple is also classified as a Navatirupathi, the nine temples revered by Nammazhwar located in the banks of Tamiraparani river. Along with the Aravindalochanar temple located 100 yards away, the temple is referred as Irattai Tirupathy (meaning twin Tirupathis).

A granite wall surrounds the temple, enclosing all its shrines. Unlike other South Indian temples, the temple does not have a rajagopuram, the temple's gateway tower. The Vijayanagar and Nayak kings commissioned pillared halls and major shrines of the temple during the 16th century.

Devapiran is believed to have appeared to slay the demon Somuka who abducted the four Vedas. The temple follows Thenkalai tradition of worship. Four daily rituals and three yearly festivals are held at the temple, of which the ten-day annual Brahmotsavam during the Tamil month of Chittirai (April - May) and the Nammazhwar birth celebrations with Garudasevai with all nine temple of Navatirupathi, being the most prominent. The temple is maintained and administered by the Hindu Religious and Endowment Board of the Government of Tamil Nadu.

As per Hindu legend, Somuka, a demon, defeated Brahma, the Hindu god of creation and stole the four Vedas (sacred texts) from him. Brahma was helpless and he did severe penance in the banks of Tamiraparani River seeking favour from Vishnu in the form of Devapiran. Pleased by the penance, Vishnu appeared to Brahma and promised to retrieved the Vedas. He killed the demon Somuka and restored the Vedas to Brahma. He also wished to set his abode as Srivakuntam and resided there as Vaikuntanatha.[2] 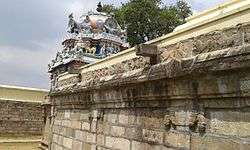 Image of the vimana, the roof of the sanctum

There are six inscriptions in the temple deciphered by the Archaeological Department. The inscription from a ruler named Konerimaikondan records a gift of five velis of land as a tax free gift to the temple. The temple also obtained grant for building and maintenance of a garden from a ruler who defeated the Cheras. The Pandya ruler Jatavarman Kulasekaran I (1190–1216 CE) also offered a similar grant to the temple. Maravarman Sundara Pandyan (1216–1238) made offerings to perpetual lighting of the temple. An inscription from his reign also indicates the installation of the shrine of Karunthadankanni. Vira Pandyan IV (1309–1345) offered land to the temple to perform special poojas in the temple during his birthday in the Tamil month of Vaikasi. During 1801, the temple acted as a fort for the British against the forces of Veerapandiya Kattabomman (1790–99). It is believed that the marks of war were visible in the temple during modern times. An official of the Madurai Nayak rule, Vadamalayappa Pillai arranged for the installation of Dasavathara images and Thiruvenkamudayan hall. There were also lot of offerings in jewels and kind made to the temple during his period. There were other people like Pillai Perumal, Ellarukum Nallan and Chockalingam, who made similar grants. The wooden chariot with minute sculptures were installed by Paramasivan Pillai during modern times.[2] 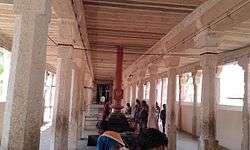 The temple occupies an area of 5 acres (2.0 ha) and is surrounded by a granite wall 580 ft (180 m) long and 396 ft (121 m) broad. Unlike other South Indian temples, the temple does not have a rajagopuram, the temple's gateway tower. A granite wall surrounds the temple, enclosing all its shrines and two of its three bodies of water. The sanctum houses the image of Devapiran in standing posture. The image is made of Saligrama stone and ablution is usually done with milk. The hall preceding the sanctum, the Artha Mandapam houses the festival image of Kallapiran made of panchaloha with the images of Sridevi and Bhudevi on either of his sides. It is believed that the sculptor caressed the cheeks of the image with his hand as he got enchanted by the image and it is seen in the image. The Ardha mandapa is guarded by two Dwarapalas on either sides.

There are two shrines for the two consorts of Vishnu, Caikunta Nayaki and Chorantha Nayaki, both facing each other. There are separate shrines for Senai Mudaliyar, Garuda, Venugopala, Manavalamamunigal and Yoga Narasimha. There is another shrine that houses the images of the ten avatars of Vishnu, the Dasavatharam. The temple has five precincts. The Mahamandapa and the Swarga Madapa are believed to be later additions.[2] The Dwajastamba mandap has pillars with refined architectural features.[2] The temple maintains an elephant, which is housed in the hall close to the temple flagstaff.[3] 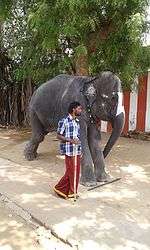 Brahmanda Purana one of the eighteen sacred texts of Hinduism and written by Veda Vyasa contains a chapter called Navathirupathi Mahatmeeyam that describes all the nine temples of Navatirupathi.[2] The Devapiran temple is revered in Nalayira Divya Prabandham, the 7th–9th century Vaishnava canon, by Nammazhwar. The temple is classified as a Divyadesam, one of the 108 Vishnu temples that are mentioned in the book. The temple is also classified as a Navatirupathi, the nine temples revered by Nammazhwar located in the banks of Tamiraparani river.[2][4] Nammazhwar makes a reference about the temple in his works in Thirvaimozhi. During the 18th and 19th centuries, the temple finds mention in several works like 108 Tirupathi Anthathi by Divya Kavi Pillai Perumal Aiyangar.[2] The temple also forms a series of Navagraha temples where each of the nine planetary deities is associated with one of the Navatirupathi temples. The temple is associated with Ketu, a snake planet. Along with the Aravindalochanar temple located 100 yards away, the temple is referred as Irattai Tirupathy (meaning twin Tirupathis).[5]

The Garuda Sevai utsavam(festival) in the month of Vaikasi(May-Jun) witnesses nine Garudasevai, a large event in which festive images from the Nava Tirupathi shrines in the area are brought on Garuda vahana(sacred vehicle) to Alwarthirunagari Temple. An idol of Nammalvar is also brought on a Anna Vahanam(palaquin) and his paasurams(verses) dedicated to each of these 9 temples are recited. The utsavar(festival deity) of Nammalvar is taken in a palanquin to each of the nine temples, through the paddy fields in the area. The paasurams(poems) dedicated to each of the nine Divyadesams are chanted in the respective shrines. This is the most important of the festivals in this area, and it draws thousands of visitors.

The temple follows the traditions of the Thenkalai sect of Vaishnavite tradition and follows Pancharathra aagama. The temple priests perform the pooja (rituals) during festivals and on a daily basis. As at other Vishnu temples of Tamil Nadu, the priests belong to the Vaishnavaite community, a Brahmin sub-caste. The temple rituals are performed four times a day: Kalasanthi at 8:30 a.m., Uchikalam at 11:30 p.m., Sayarakshai at 6:00 p.m., and Aravanai Pooja between 8:00  - 8:00 p.m. Each ritual has three steps: alangaram (decoration), neivethanam (food offering) and deepa aradanai (waving of lamps) for both Devapiran and Karunthadankanni. During the last step of worship, nagaswaram (pipe instrument) and tavil (percussion instrument) are played, religious instructions in the Vedas (sacred text) are recited by priests, and worshippers prostrate themselves in front of the temple mast. There are weekly, monthly and fortnightly rituals performed in the temple.[4]