For other uses, see Ebisu (disambiguation). 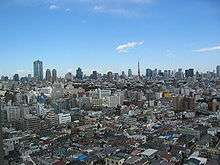 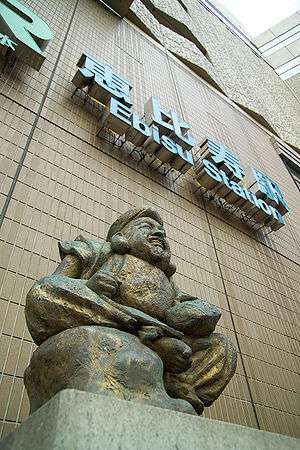 Statue of Ebisu in front of Ebisu Station 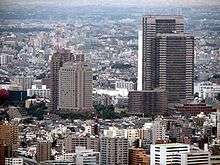 Ebisu (恵比寿) is major district of Shibuya-ku in Tokyo, Japan. It was developed on the site of a former brewery and is now home to Yebisu Garden Place. It is renowned for its high concentration of bars and restaurants.

Ebisu is a major district and neighborhood of the Special Ward of Shibuya-ku. It is located south of Shibuya and north of Meguro.[1]

Ebisu is accessed by the JR Yamanote Line and Tokyo Metro Hibiya Line via Ebisu Station.

Ebisu was founded around 1928 as a community developed around the Japan Beer Brewery Company (now Sapporo Breweries Limited) facilities which began brewing Yebisu Beer in 1890.[2]

The district and railway station of Ebisu takes its name from the Yebisu Beer brand, which in turn was named after Ebisu (one of the Japanese Seven Gods of Fortune). The spelling "Yebisu" is intentionally archaic. With or without the "y" the pronunciation is the same as "Ebisu".[2][4]

Ebisu is renowned for food and drink, with a high concentration of restaurants, cafés, izakaya, ramen shops, bars and old-fashioned tachinomi ("stand and drink") bars.[3][5][6]

Yebisu Garden Place is a shopping and cultural centre located in Ebisu. It has a sloped promenade leading to a large central plaza covered by a wide glass arch. The area regularly hosts events and markets on weekends.[4][7][8]

It is accessible via the Ebisu Skywalk (a fast-moving covered walkway) from JR Ebisu Station East Exit, which takes approximately 5 minutes on foot.[9]

The complex contains the following attractions:[10][11]

The publication The Diplomat has its headquarters in the Ebisu MF Building.[14]