This article is about the city. For the town, see Ichinomiya, Aichi (town).

Ichinomiya (一宮市, Ichinomiya-shi) is a city located in Aichi Prefecture, Japan. The city is often called Owari-Ichinomiya to avoid confusion with another Ichinomiya (now part of the city of Toyokawa).

Ichinomiya is situated in western Aichi Prefecture, bordered by Gifu Prefecture to the west.

Ichinomiya literally means "the first shrine" of the province. In case of this city, it was Masumida Shrine of Owari Province. Ichinomiya developed as a monzen-machi from the Heian period.

The modern town of Ichinomiya was founded with the establishment of the municipalities system on April 1, 1889. It was raised to city status on September 1, 1921. The city annexed the neighboring villages of Haguri and Nishinari in 1940, and with an additional eight surrounding municipalities (the villages of Chiaki, Tanyo and Kitakata, and the towns of Asai, Yamato, Akiwara, Oku and a portion of Imaise) in 1955.

On April 1, 2002 Ichinomiya was designated as a Special City, with increased local autonomy. On April 1, 2005, the city was further expanded by absorbing the city of Bisai, and the town of Kisogawa (from Haguri District) which would make the city the fourth largest in Aichi Prefecture, behind Nagoya, Toyota, and Toyohashi. 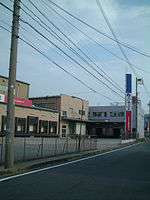 The headquarters of Kanesue

Traditional noted for textiles, Ichinomiya is now a regional commercial center with a mixed economy of manufacturing and agriculture. Kanesue has its headquarters in Ichinomiya. It moved to its current headquarters in July 1976.[1] 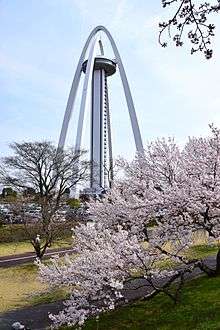 Row of cherry blossom trees of the Kisogawa dike