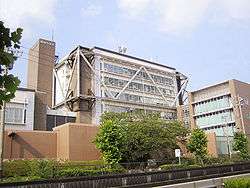 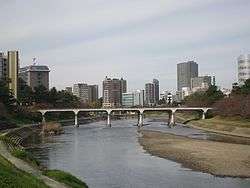 Okazaki is located in the coastal plains of southeastern Aichi Prefecture. The ground rises to undulating hills in the former Nukata area to the northeast. About 60 percent of the city area is forested and remains sparsely populated.

The area around present-day Okazaki has been inhabited for many thousands of years. Archaeologists have found remains from the Japanese Paleolithic period. Numerous remains from the Jomon period, and especially from the Yayoi and Kofun periods have also been found, including many kofun burial mounds. During the Sengoku period, the area was controlled by the Matsudaira clan, a branch of which later rose to prominence as the Tokugawa clan, which ruled Japan during the Edo period. During this time, Okazaki Domain, a feudal han was established to rule the immediate area around Okazaki, and was entrusted to a daimyō. Several smaller domains were also located within the present-day city limits, including Fukozu (later Mikawa-Nakajima), Okudono Domain and Nishi-Ohira Domain. The town prospered as a post station on the Tōkaidō connecting Edo with Kyoto.

Following the Meiji Restoration, the modern town of Okazaki was established on October 1, 1889 within Nukata District of Aichi Prefecture. On October 1, 1914, Okazaki annexed neighboring Hirohata Town. Okazaki was proclaimed a city on July 1, 1916. The city suffered damage in both the 1944 Tōnankai earthquake (which killed 9 people) and the 1945 Mikawa earthquake (which killed 29 people). During World War II, the July 19, 1945 Bombing of Okazaki killed over 200 people and destroyed most of the city center. Although Okazaki was the location of an Imperial Japanese Navy air field, military installations were not damaged in the attack. In 1955, through a series of mergers and consolidations, the area of Okazaki expanded considerably. The former towns of Iwazu, Fukuoka, and Yahagi, and the villages of Honjuku, Yamanaka, Kawai, Fujikawa and Ryugai were all merged into Okazaki. The 1959 Isewan Typhoon caused considerable damage, and killed 27 residents. On October 15, 1962, Okazaki annexed the neighboring town of Mutsumi.

Okazaki was proclaimed a core city on April 1, 2003 with increased autonomy from the prefectural government. On January 1, 2006, the town of Nukata (from Nukata District) was merged into Okazaki.

As of May 1, 2006, the city government estimated the population at 368,201. The city is relatively young, with 139,233 households (2.64 residents per household). The population comprises 185,651 males and 182,550 females, reflecting the number of young men who move to Okazaki to work in the manufacturing sector. This fast population growth reflects the low unemployment rate, as well as affordable housing close to Nagoya. In April 2006 there were 263 births and 199 deaths, for a natural increase of 64 people. While for the same month 2,197 people moved into Okazaki, and 1,910 left, for a net increase of 287 people.

Of the total population, 10,760 are foreign nationals (2.92% of total, compared with the nationwide average of 1.55%). There are 5,427 foreign males, and 5,333 foreign females. Including those registered as stateless, the foreign population comes from 71 nationalities, though more than half are from Brazil. As of April 2006, there were 5,573 registered Brazilians (3,042 males, 2,531 females), comprising 51.79% of the foreign population. Other significant foreign communities include Koreans (17.43%), Chinese (10.89%) and Filipinos (8.88%). There are very few Westerners in general (less than 3%), and the number of registered foreigners from countries where the majority of citizens are native English speakers is less than 200.

While the local Mikawa dialect is considered to be generally indistinguishable from what is considered modern standard Japanese, there are very subtle and distinctive differences. Mikawa dialect has, on the other hand, substantial differences when compared to the dialect of Nagoya and western areas of Aichi, where the Nagoya dialect (also known as Owari-ben, Owari being the traditional name for the Nagoya region) is the traditional dialect. Cognitively Mikawa-ben and modern contemporary Japanese are extremely close, in part due to the influence of the Tokugawa Shogunate and accidents of history. In recent decades the large number of people moving into Okazaki and the surrounding cities (particularly to work in the motor vehicle industry) and mass media have influenced the local dialect, with the result that in day-to-day life more people are using only standard Japanese.

The Tōkaidō Shinkansen passes through Okazaki‘s city limits but does not stop. The nearest Shinkansen stations are Toyohashi, Mikawa-Anjō and Nagoya. Okazaki Castle was originally built in 1455. Captured by the Matsudaira clan in 1524 (and probably relocated from the other side of the river), the castle remains associated with Tokugawa Ieyasu, even though the latter transferred to Edo in 1590. During the Edo period it served as the seat of the Okazaki Domain and dominated the city until the Meiji Restoration.

Okazaki is famous for its fireworks. The Tokugawa Shogunate restricted production of gunpowder outside of the immediate region of Okazaki (with few exceptions), and even today, more than 70% of Japan's fireworks are designed and manufactured here. A large fireworks festival, which people from all over Japan come to see, is held annually on the first Saturday in August in the area surrounding Okazaki Castle.

Hatchō Miso is a dark miso paste made using a process of steaming soybeans (instead of boiling) followed by maturation in cedar barrels under the weight of 3 tons of carefully stacked river stones for at least 2 years. Located 8 chō (Hatchō, or approximately 900m) west of Okazaki Castle near the Yahagi river, there are two 8cho Miso companies, one is Maruya from 1337,[3] and another is Kakukyu.[4] The old tiled buildings are heritage listed and one company (Kaku) has been a family business for 18 generations. It is one of the most famous miso producers in Japan, supplying the Emperor by appointment, and popular as a health food. The 2006 NHK morning drama serial, Junjo Kirari (Sparkling Innocence) was largely filmed in and around the Hatchō Miso grounds. Tours are available every 30 minutes and free samples are provided. Hatchō Miso's health properties are so great that it was donated to Chernobyl's citizens following the disaster, to help prevent and treat radiation sickness.

The temple of Takisan-ji (7th century) includes several Important Cultural Properties of Japan. The main hall is from the Kamakura period and is the location of a fire festival held each February on the closest Saturday to the lunar calendar New Year. The distinctive Sanmon gate and the main image are designated as important cultural properties. Adjoining the temple is Takisan Tōshō-gū, a Shinto Shrine built in 1646 by Tokugawa Iemitsu.