Joaquín Castro (born September 16, 1974)[1] is an American politician who has served since 2013 in the United States House of Representatives for Texas's 20th congressional district. The district includes just over half of his native San Antonio, Texas, as well as some of its nearby suburbs. From 2003 to 2013, he was a representative in the Texas House of Representatives for District 125.[2] While in the Texas legislature Castro served as Vice-Chair of the Higher Education Committee and was a member of the Judiciary & Civil Jurisprudence Committee. He has previously served on the County Affairs Committee, Border & International Affairs Committee and the Juvenile Justice & Family Issues Committee.[2]

Julián Castro, his identical twin brother, served as Mayor of San Antonio from 2009 to 2014 and is now the 16th United States Secretary of Housing and Urban Development in the Cabinet of President Barack Obama.[3]

Castro was born and reared in San Antonio and attended Thomas Jefferson High School. Castro has stated that his interest in public service developed at a young age from watching his parents' involvement in political campaigns and civic causes. His father, Jessie Guzman, was a retired mathematics teacher from the Edgewood Independent School District in the west side of San Antonio, and his mother, Marie "Rosie" Castro, a community activist. Jessie and Rosie never married. He graduated with honors from Stanford University with a Bachelor of Arts in political science and communications and earned a Juris Doctorate with his twin brother at Harvard Law School in Cambridge, Massachusetts.[4] After law school, the two brothers continued together to work for the law firm Akin Gump Strauss Hauer & Feld before starting their own firm in 2005.[5]

In June 2011, Castro announced that he was running for a seat in the United States House of Representatives in the newly-drawn Texas's 35th congressional district. He was initially set to challenge fellow Democrat and nine-term incumbent Lloyd Doggett, whose home in Austin had been drawn into the district, in the Democratic primary[11] However, on November 28, after Charlie Gonzalez of the neighboring 20th District announced his retirement after seven terms, Castro announced his intent to run instead for the 20th District seat. He was unopposed in the Democratic primary, all but assuring him of being the next congressman from this heavily Democratic, Hispanic-majority district. At the 2012 Democratic National Convention, he introduced his brother Julián as keynote speaker.[9] In November 2012, Castro defeated Republican David Rosa 64%-34%.[12] becoming only the fifth person to represent this district since its creation in 1935.

Representative Castro preparing to deliver a keynote speech at LULAC.

Castro was officially sworn into office on January 3, 2013 becoming a member of the 113th United States Congress. He was chosen as the president of the freshman class of Democrats in the 113th Congress.[13] In the 114th Congress, House Democratic Whip Steny Hoyer named Castro a Chief Deputy Whip.[14] During the 2016 presidential election, Castro served as a surrogate for Hillary Clinton's campaign.[15]

Castro is the son of Jesse Guzman and Rosie Castro and the identical twin brother of Julián Castro, the former Mayor of San Antonio and the 16th United States Secretary of Housing and Urban Development in the Cabinet of President Barack Obama.[3] In addition to his work in the Texas Legislature, Castro practices law in San Antonio. He has also taught as a visiting professor of law at St. Mary's University and as an adjunct professor at Trinity University in San Antonio. 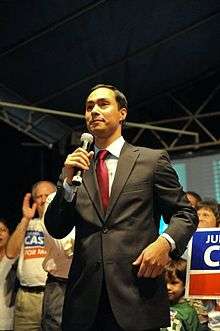 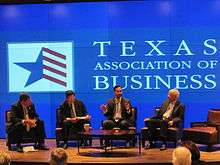 Representative Castro takes part in an education panel at the Texas Association of Business Conference.