Martha McSally (born March 22, 1966) is a retired United States Air Force Colonel and politician who is currently a Republican member of the United States House of Representatives. She was the first American woman to fly in combat following the 1991 lifting of the prohibition of women in combat, flying the A-10 over Iraq and Kuwait during Operation Southern Watch.[1] She is the first woman to command a USAF fighter squadron, the 354th Fighter Squadron (354 FS) based at Davis-Monthan Air Force Base.

After her military career, McSally ran for Congress in her home district three times. She ran in the April 2012 Republican primary for the special election in Arizona's 8th district, but lost to Jesse Kelly. Months later, she began the first of two races as the Republican candidate in the same district (renumbered as the 2nd district after redistricting), facing off against incumbent Democrat Ron Barber both times. In 2012, she narrowly lost.[2] But in 2014, following a recount, McSally was declared the winner on December 17, by a margin of 167 votes.[3]

McSally was born in 1966[4] in Warwick, Rhode Island, the youngest of five children. In 1978, her father, Bernard, a lawyer, died of a heart attack. Her mother, Eleanor, worked as a reading specialist to support the family.[5] 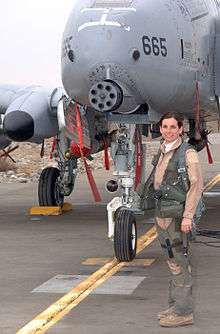 McSally with an A-10 Thunderbolt II

McSally graduated at the top of her class at St. Mary's Academy, Bayview in 1984.[5] She earned an appointment to the United States Air Force Academy, graduating in 1988.[5] She earned a Master's degree from Harvard University's John F. Kennedy School of Government following graduation from USAFA and then proceeded to pilot training.[6] McSally was first in her class at the Air War College.

McSally earned her wings following graduation from Undergraduate Pilot Training at Laughlin AFB, Texas and was initially assigned to Laughlin as a First Assignment Instructor Pilot (FAIP) in the T-37 jet trainer. Following the repeal of the combat aircraft restriction for female pilots, she completed Lead-in Fighter Training (LIFT) in 1993.[7] McSally became the first woman in U.S. history to fly a combat aircraft into enemy territory when she flew into Iraq in support of the United Nations no-fly zone enforcement.[5]

McSally completed Replacement Training Unit for the A-10 Thunderbolt II at Davis-Monthan AFB, Arizona, and was assigned to an operational A-10 squadron and was deployed to Kuwait in January 1995.[1] During that deployment, she flew combat patrols over Iraq in support of Operation Southern Watch, enforcing the no-fly zone over southern Iraq.[1] In 1999, she deployed to Europe in support of Operation Allied Force. McSally was selected as one of seven active duty Air Force officers for the Legislative Fellowship program, during which time she lived in Washington, D.C. and advised Senator Jon Kyl (R-AZ) on defense and foreign affairs policy.[8]

Promoted to Major, she reported to Joint Task Force Southwest Asia (JTF-SWA) in Riyadh, Saudi Arabia in 2000 for an Operation Southern Watch temporary assignment. Promoted below the zone to Lieutenant Colonel, she took command of the A-10 equipped 354th Fighter Squadron at Davis-Monthan AFB in July 2004, and was subsequently deployed to Afghanistan under Operation Enduring Freedom, where she employed weapons loaded on her A-10 in combat for the first time. In 2005, McSally and her squadron were awarded the David C. Shilling Award, given by the Air Force Association for the best aerospace contribution to national defense.[8]

Lawsuit against the U.S. Department of Defense (McSally v. Rumsfeld)

McSally was represented by the Rutherford Institute in a successful 2001 lawsuit against the Department of Defense, challenging the military policy that required U.S. and U.K. servicewomen stationed in Saudi Arabia to wear the body-covering abaya when traveling off base in the country.[9][10] At the time of the lawsuit McSally, as a Major (O-4), was the highest ranking female fighter pilot in the U.S. Air Force. Her suit alleged "the regulations required her to send the message that she believes women are subservient to men."[11] In addition to the issue of religious garb, McSally noted that policies also included other requirements:

In a "60 Minutes" interview broadcast on CBS on January 20, 2002, she described the discrimination she experienced under the policy: "I have to sit in the back and at all times I must be escorted by a male ... [who], when questioned, is supposed to claim me as his wife," she said. "I can fly a single-seat aircraft in enemy territory, but [in Saudi Arabia] I can't drive a vehicle."[11]

During this process, she was granted audience with several high-level officials, including two Secretaries of Defense, William Cohen and Donald Rumsfeld, which was atypical of a service member of her comparatively junior rank and position, especially in light of her public protest. General Tommy Franks, then commander of the United States Central Command (USCENTCOM), announced in 2002 that U.S. military servicewomen would no longer be required to wear the abaya, although they would be "encouraged" to do so as a show of respect for local customs. Commenting on the change, Central Command spokesman, Colonel Rick Thomas, said it was not made because of McSally's lawsuit, but had already been "under review" before the lawsuit was filed. News reports noted that McSally had been fighting for a change in the policy for seven years, and had filed the lawsuit after she had been threatened with a court martial if she did not comply and wear the abaya.[12]

Critics of the policy noted that while female U.S. military personnel had been required to wear the abaya outside of military installations in Saudi Arabia, the situation was not the same for "women diplomats" of the U.S. Department of State assigned to the U.S. Embassy in Riyadh, who were actually encouraged not to wear the abaya when they were involved in official business, "...because they are representing the United States." Embassy officials stated that, "...in their personal time, embassy employees can choose how to dress." According to these U.S. officials, "...the Saudi government does not require non-Muslim women to wear a dark robe known as an abaya.... The official guidance, issued by the Saudi Embassy in Washington, says that foreigners should dress conservatively but they are not required to wear the robe."[13]

Eventually the U.S. Congress "approved legislation that prohibited anyone in the military from requiring or encouraging servicewomen to put on abayas in Saudi Arabia or to use taxpayers’ money to buy them."[14]

McSally has continued to speak out about gender relations in Saudi Arabia.[15][16] McSally retired from active duty with 22 years of commissioned service in the U.S. Air Force on May 6, 2010. As of March 2011, she worked as a professor at the George C. Marshall European Center for Security Studies in Garmisch-Partenkirchen, Germany.[17]

McSally then ran for and won the Republican nomination in the regular election for the district, which had been renumbered as the 2nd District. She faced incumbent Democrat Ron Barber and Libertarian nominee Anthony Powell in the November 2012 election.[19] She was endorsed by the National Federation of Independent Businesses, United States Chamber of Commerce, National Association of Wholesalers, of Commerce, National Association of Home Builders and Associated Builders and Contractors.[20]

The race was one of the closest in the nation. McSally led on election night by a few hundred votes, but the race was deemed too close to call due to a large number of provisional ballots. Barber eventually overtook McSally as more ballots were counted. By November 16, most of the outstanding ballots were in heavily Democratic precincts near Tucson. The Arizona Republic determined that as a result, McSally would not be able to pick up enough votes to overcome Barber's lead.[21] By November 17, Barber's lead over McSally had grown to 1,400 votes. That day, the Associated Press determined that there weren't enough ballots outstanding for McSally to regain the lead, and called the race for Barber.[22] She conceded the race later that morning.[21]

McSally declared her intention of running again for the 2nd district seat in 2014. She won the June 3 primary against 2 other Republican opponents, taking nearly 70% of the vote.[23] In the November 4 general election, the race was too close to call by the end of election night, and eventually went on to be the final federal election of the 2014 cycle to be decided. With 100% of the votes counted, McSally had a 161-vote lead and declared victory on November 12, 2014, but due to the fact that the margin of victory was less than 1%, an automatic recount was called on December 1.[24] On December 17, the official recount declared McSally the winner by 167 votes.[25] She is only the second Republican ever to represent a southern Arizona-based district in the U.S. House of Representatives; the first was Jim Kolbe, who represented what is now the 2nd district, from 1985 to 2007. McSally is also the first female Republican representative from Arizona.[26]

McSally ran for re-election in 2016. She ran unopposed in the Republican primary.[27] She defeated Democratic opponent Matt Heinz by a margin of 54 to 46 percent in the general election.[28]

In her freshman term in Congress, McSally had seven bills approved by the U.S. House.[29] Among all members of the U.S. House, McSally is tied for third in the number of bills she has authored that have made it through the House. Her bills are generally "narrowly drawn proposals to improve homeland security or to help veterans."[27]

McSally added an amendment to the proposed Department of Defense budget for 2017 (H.R. 5293) that would limit funding for military band performances.[30]

McSally has vowed to vote for repealing the Affordable Care Act.[31] She also supports local control of education, stating that, “education for our kids should not be dictated by Washington bureaucrats but by local experts with parent involvement and rewards for excellence. Hard-earned middle-class-taxpayer money should not go to D.C. to strip funds off the top, then return to the states with conditions, paperwork and mandates resulting in cookie-cutter educational recipes."[31][32]

McSally has stated her belief that women around the country are concerned with jobs, affordable healthcare, the future of social security, and education. She appeared on national television in October 2012 saying, "You want to talk about a war on women? Walk in my shoes down the streets of Kabul. Walk in my shoes down the streets of Riyadh; where women have to be covered up. Where they're stoned, where they’re honor killed if they’ve been raped, where they can’t drive and they can’t travel without the permission of a male relative. That’s a war on women."[33]