This article is about the current U.S. Congresswoman from Maryland. For the actress, see Donna Edwards (actress).

Donna F. Edwards (born June 28, 1958) is the U.S. Representative for Maryland's 4th congressional district, serving since a special election in 2008. She is a member of the Democratic Party. The district includes most of Prince George's County, as well as part of Anne Arundel County.

A lawyer and longtime community activist, she defeated 15-year incumbent Albert Wynn in the 2008 Democratic primary,[1] and, following his resignation, won a special election on June 17, 2008, to fill the remainder of this term.[2] She was sworn in two days later on June 19, becoming the first African-American woman to represent Maryland in the United States Congress.[3] Edwards ran for a full term in November 2008, defeating Republican candidate Peter James with 85% of the vote.[4] She ran for U.S. Senate in 2016 in the primary to replace retiring Barbara Mikulski instead of running for re-election to her Congressional seat, but was defeated by Chris Van Hollen in the Democratic primary.[5]

She sponsored an amendment to the U.S. Constitution that would repeal the 2010 Supreme Court ruling in Citizens United v. Federal Election Commission.[6]

Edwards was born in Yanceyville, North Carolina. She earned B.A. degrees in English and Spanish from Wake Forest University, where she was one of only six black women in her class.[7] After working for Lockheed Corporation at the Goddard Space Flight Center with the Spacelab program,[8] she attended and earned a J.D. from the University of New Hampshire School of Law (formerly the Franklin Pierce Law Center). Edwards worked for Albert Wynn as a clerk in the 1980s, when he served in the Maryland House of Delegates.

Edwards co-founded and served as the first executive director of the National Network to End Domestic Violence, an advocacy and legal support group for battered women. She worked to pass the 1994 Violence Against Women Act.

In the spring of 2015, Donna F. Edwards, along with several other members of the House of Representatives, introduced the Restoring Education and Learning Act (REAL Act) to bring back Pell Grants to prisoners. Edwards’ press release outlines numerous advantages to prisoner education, including net benefits to taxpayers who bear the costs of recidivism.[9]

On April 27, 2009, Rep. Donna Edwards was arrested outside the Sudan embassy during a protest against genocide in Darfur.[10] The Representative and five other U.S. Congressional Representatives were protesting the blocking of aid to victims. They were arrested after ignoring warnings issued by police maintaining a police line to protect the embassy in Washington, D.C. 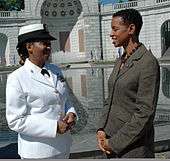 Edwards challenged seven-term incumbent Al Wynn in the 2006 Democratic primary - the real contest in this heavily Democratic, black-majority district. Edwards focused primarily on Wynn's voting record. Wynn, considered a conservative by African-American Democratic standards, was one of four Congressional Black Caucus members that voted for the 2002 Iraq War resolution. Edwards condemned the war before it started. Wynn eventually began to say he was misled by the Bush Administration and his vote was a mistake. Edwards opposed the repeal of the estate tax, which Wynn voted for. Similarly, Edwards criticized Wynn's vote for the bankruptcy bill of 2005, which eliminated some bankruptcy protections for individuals. Wynn supported the energy bill promoted by Vice President and former Halliburton CEO Dick Cheney. Wynn opposed the net neutrality bill of 2006, which Edwards supports.

On August 16, 2006, before a debate at Prince George's Community College, an altercation occurred between Wynn's staffers and an Edwards volunteer, leaving the volunteer with a bloody gash to the head.[13] This event brought much media attention to the race.

The primary was held on September 12, 2006. Wynn defeated Edwards by 49.7 percent to 46.4 percent, with a margin of 2,725 votes out of more than 82,000 cast. George McDermott, a little-known candidate, took 3.9 percent.[15] The final tally of the primary was unclear for nearly two weeks because of widespread voting problems on new electronic voting machines in Montgomery and Prince George's counties.[16]

In 2008, Edwards again challenged Wynn for his seat in the Democratic primary. During the 2008 campaign, Edwards accused Wynn of being out of touch with the community and of accepting hundreds of thousands of dollars of corporate money. Wynn counter-attacked Edwards as hypocritical, citing the fact that she served as executive director of the Arca Foundation, an organization that has invested millions of dollars in oil and gas companies.[17] 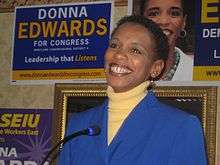 In the February 12, 2008, primary, Edwards defeated the eight-term incumbent in a rout, taking 60% of the vote to Wynn's 35%. The win virtually assured her of victory in the heavily Democratic district in November.[18]

After the primary, Wynn announced he would retire effective June 2008. Edwards won the Democratic nomination for the June 17, 2008, special election to serve out the last six months of Wynn's term.[19]

As expected, Edwards easily won the special election, taking 81 percent of the vote over Republican Peter James and Libertarian Thibeaux Lincecum.[20] She took office two days later, giving her a leg-up on seniority over any new congresspersons who were elected in 2008.

Edwards ran for a full term in November 2008 and was an overwhelming favorite; a Republican has never tallied more than 25 percent of the vote in the 4th district since it assumed its current configuration after the 1990 Census.[21] Indeed, many of the 4th district's residents already thought of her as the district's congresswoman even before the special election.[2] As expected, Edwards easily won a full term with 85 percent of the vote, one of the highest percentages in the nation for a Democrat facing major-party opposition.[4]

Edwards won against Delegate Herman L. Taylor, Jr. in the September, 2010, primary, and then defeated Republican Robert Broadus with 83 percent of the vote in the general election.

Edwards won against George McDermott and Ian Garner in the Democratic primary, and then defeated Republican Faith M. Loudon and Libertarian Scott Soffen with 77 percent of the vote in the general election.

Edwards won against Warren Christopher in the Democratic primary, and then defeated Republican Nancy Hoyt and Libertarian Arvin Vohra with 70 percent of the vote in the general election.

Edwards challenged Rep. Chris Van Hollen (D-MD) for the U.S. Senate seat to be vacated by Barbara Mikulski's (D) retirement, however on April 26, 2016 Edwards lost the primary election. As she had run for the Senate seat instead of reelection to her Congressional seat, this meant Edwards would be out of public office when her term expires in January 2017.[22]