This article is about the Wisconsin Congresswoman. For the California legislator, see Gwen Moore (California politician).

Gwendolynne Sophia "Gwen" Moore (born April 18, 1951) is the U.S. Representative for Wisconsin's 4th congressional district, serving since 2005. She is a member of the Democratic Party.

The district is based in Milwaukee and as a result of the 2011 redistricting also includes some nearby Milwaukee County suburbs: Bayside, Brown Deer, Cudahy, Fox Point, Glendale, St. Francis, South Milwaukee, West Milwaukee, Shorewood and Whitefish Bay. She is the first woman to represent the district. She is also the second woman after Tammy Baldwin and the first African-American elected to Congress from Wisconsin.

Moore was born in Racine, but has spent most of her life in Milwaukee. She is the eighth of nine children; her father was a factory worker and her mother a public school teacher. Moore attended North Division High School and served as student council president.[1] She later attended Marquette University and became a single mother and was for a while a welfare recipient. Nonetheless, she was able to earn a Bachelor of Arts degree in political science, graduating in 1973.

She worked as an organizer with Volunteers In Service to America.[2] Through the program, she worked to establish the Cream City Community Development Credit Union to offer grants and loans to low-income residents to start businesses. For her work, she was awarded the national “VISTA Volunteer of the Decade” award from 1976 to 1986.[3] From 1985 to 1989, she worked for the City of Milwaukee as a neighborhood development strategist and for the state Department of Employment Relations and Health and Social Services. Moore also worked for the Wisconsin Housing and Economic Development Authority (WHEDA) as a housing officer.[1]

Moore was elected to the Wisconsin Assembly in 1988 and served two terms. She was a prominent voice calling into an investigation into the case of sexual assault and serial killer Jeffrey Dahmer, who lived two blocks away from Moore.[1]

In the election of 1992, Gwen Moore was elected to the Wisconsin State Senate, in which she served the 4th District from 1993 to 2005. Moore was the first African-American woman to be elected to the upper chamber of the Wisconsin legislature.[1] She became a prominent voice against mandatory ID security measures to enter the state capitol. She said "I am too often reminded [9/11 hijacker] Mohammed Atta had a photo ID. This will not tell people whether I am a terrorist. This disenfranchises people who come to their Capitol."[1] 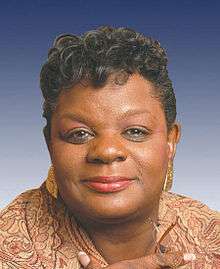 Moore was elected to the United States House of Representatives in 2004, earning 69.6% of the vote and defeating Republican attorney Gerald Boyle in the general election. Moore was one of a handful of African-Americans to have been elected to Congress as freshmen in 2004, and she was the first African-American and second woman (after Tammy Baldwin) to represent Wisconsin in Congress.[4]

Moore is a prominent advocate for women’s rights, releasing frequent statements on topics ranging from domestic abuse awareness to abortion rights. In January 2011, she was elected Democratic co-chair of the Congressional Women's Caucus to become a leader on health insurance reform and the protection of reproductive rights.[5]

During the congressional debate in February 2011 on the Pence Amendment proposing to defund the health services organization Planned Parenthood, in response to comments from Paul Broun suggesting that Planned Parenthood promoted racist eugenics because more black women than white women have abortions, Moore spoke about her experience raising children on little money, and why "planned parenthood is healthy for women, it’s healthy for children and it's healthy for our society".[6] She publicly opposed the investigation into the financial accounting of Planned Parenthood, stating that the investigation “is an unfortunate waste of taxpayer dollars.”[7] Moore voted “nay” on Amends Federal Health Care Law to Prohibit Abortion Coverage on October 13, 2011.[8] In March 2012, during the House debate over re-authorizing the Violence Against Women Act, she spoke about her own experience of being sexually assaulted and raped as a child and as an adult, criticizing the all-male Senate Judiciary Committee that voted no on the bill.[9]

Over the first session of the 109th Congress, Moore earned 90% and higher legislative agenda approval scores from Planned Parenthood of Wisconsin, the National Association for the Advancement of Colored People, the Sierra Club of Wisconsin, and the Service Employees International Union. Moore has focused herself legislatively on traditional Democratic and progressive issues, believing that the federal government should play a significant role in the amelioration of poverty and the resolution of difficult local problems. Moore has received support from interest groups ranging from the American Civil Liberties Union (93%), The Human Rights Campaign (100%), and The National Abortion and Reproductive Rights Action League (NARAL) (100%), to The National Farmer's Union (100%) and Defenders of Wildlife Action Fund (100%). She lacks support from those supporting hunting and sportsmen rights (0% support from Sportsmen and Animal Owner’s Voting Alliance), pro-lifers (0% support from National Right to Life), and conservative tax reform stances (0% support from Americans for Tax Reform).[10]

On May 6, 2006, Moore and eight fellow members of the Congressional Black Caucus were arrested and ticketed for unlawful assembly and disorderly conduct after they stepped onto the grounds of the Embassy of the Sudan to call attention to the ongoing Darfur conflict in Sudan. Moore said that the group expected ex ante to be arrested but that they were pleased to participate in a "peaceful act of civil disobedience".[11]

In June 2014, former state senator and convicted felon Gary George filed nomination papers to run against Moore in the Democratic primary, claiming that he was running "in response to citizen demands for stronger leadership from Milwaukee's political community."[12] George lost by a large margin in the August 2014 Democratic primary, with 21,234 votes to Moore's 52,380 (69%).[13]

Moore's son, Sowande Ajumoke Omokunde (then aged 26), was arrested in connection with the November 2, 2004 (Election Day) tire-slashing of official Republican Party vehicles in Milwaukee. He was charged with a felony in connection with the event on January 24, 2005, but agreed, on January 20, 2006, to plead no contest in exchange for a sentencing recommendation of restitution and probation.[14]

On April 26, 2006, Milwaukee County Circuit Judge Michael Brennan sentenced Omokunde to serve four months in prison and to pay $2,305 in fines and restitution. In response, Moore said, "I love my son very much. I'm very proud of him. He's accepted responsibility."[15]

Moore has become a U.S. delegate to the Parliamentary Assembly of the Organization for Security and Co-operation in Europe.[16]

In 2016, Moore attended the Democratic National Convention as a super-delegate, and pledged her support to Hillary Clinton over Bernie Sanders.[17]