Linda T. Sánchez (born January 28, 1969) is the U.S. Representative for California's 38th congressional district, serving in Congress since 2003. She is a member of the Democratic Party. She currently serves on the powerful Ways and Means Committee and is the ranking member on the Ethics Committee. In the 114th Congress, she served as Chair of the Congressional Hispanic Caucus.

Sánchez was born in Orange, California. She grew up with six siblings, raised by Mexican immigrant parents in Anaheim, where she attended Valencia High School.[2] She earned her BA in Spanish in 1991 at the University of California, Berkeley and her Juris Doctor degree in 1995 at the UCLA School of Law, where she was an editor of the Chicano-Latino Law Review.

Sánchez was an attorney specializing in labor law prior to her public service career. In 1998, she joined the International Brotherhood of Electrical Workers (IBEW) Local 441 and became a compliance officer. In 2000 she was unanimously elected to the position of Executive Secretary/Treasurer of the Orange County Central Labor Council.

Sánchez started her political career after a new 39th congressional district was created following the 2000 Census (the old 39th district had very different boundaries). She finished first in a six-person primary for the Democratic Party nomination in March 2002. She won the primaries with 33.5% of the vote, with the second place candidate receiving 29.3%. She went on to win the general elections against Republican Tim Escobar by a 54.9% to 40.8% margin. She ran unopposed in the Democratic primaries in 2004, and faced Escobar again in the general elections. She defeated Escobar by a margin of 60.7% to 39.3%. For the 2006 elections, she defeated two challengers in the primary with 77.8% of the vote, and defeated attorney James L. Andion in the general election. Her sister, Loretta Sanchez, also serves in Congress. 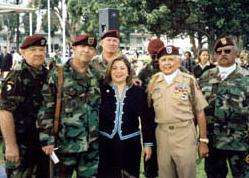 Sánchez supports a progressive tax system and voted against maintaining reduced tax rates for capital gains and dividends.[3] In addition she was rated a “Big Spender” by NTU indicating she generally supports higher tax rates.[3]

She opposes any move to privatize social security and supports keeping it strictly federally funded.[3]

She opposes new exploration for oil drilling and would remove tax benefits for oil and gas exploration. She has also opposed permits and construction for new oil refineries.[3]

She supports tax credits and incentives for investments in renewable energy.[3]

Sánchez is a pro-gun control activist and seeks to close the gun show loophole for firearm sales. She believes gunmakers and sellers are accountable and liable for misuse cases by users.[3]

Sánchez is an opponent to any moves to privatize medicare or spending cuts. In addition she supports expanding healthcare coverage by a number of programs through federal funding.[3] She has stated that she believes healthcare is a basic right.[3]

Sánchez is a pro-choice politician and has voted against repealing federal funding for abortions.[3] She opposed legislation to bar transporting minors between states for abortions and making it a crime to harm a fetus in another crime.[3]

Sánchez is a gay rights supporter and opposes discrimination based on sexual orientation or gender.[3] She was given a 100% rating by the NAACP indicating a pro-affirmative-action position.[3]

She opposes legislation that would bar the EPA from regulating emissions. Sánchez would see higher emission standards and establish trade-able allowances.[3] She supports the cash-for-clunkers program and seeks to increase public transportation and trains through massive federally funded projects.[3]

Following Hurricane Katrina in late August 2005, President George W. Bush suspended the Davis-Bacon Act, a 1934 law that requires government contractors to pay prevailing wages. Sánchez was a very vocal critic of the suspension, and led the fight to reverse it.[4] Sánchez eventually won, as Bush reversed himself on October 26, 2005.[5]

In 2009 and again in 2009, Sánchez introduced the "Megan Meier Cyberbullying Prevention Act," H.R. 1966, a bill which would criminalize the use of electronic communications if "the intent is to coerce, intimidate, harass, or cause substantial emotional distress to a person." This bill is a response to the suicide of Megan Meier, a 13-year-old girl whose 2006 suicide was attributed to cyber-bullying through the social networking website MySpace. The bill has drawn criticism from members of the on-line community, legal scholars, and others who have contended that the bill would infringe the constitutional right of freedom of speech.[6][7]

After the Arizona State Legislature passed State Senate Bill 1070 and after Arizona Governor Jan Brewer signed it into law, Sánchez generated controversy[8] when she claimed that the law, and similar laws throughout the United States, were the product of white supremacists: "There's a concerted effort behind promoting these kinds of laws on a state-by-state basis by people who have ties to white supremacy groups. It's been documented. It's not mainstream politics."[9] Rep. Gary Miller called Sanchez's comments "an outrageous accusation."[10] Her comments were also condemned by Steve Poizner.[8] 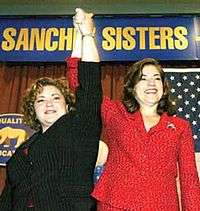 Linda and her sister Loretta Sanchez are the first pair of sisters to serve simultaneously in the United States Congress.

Sánchez is married to Jim Sullivan, whom she married on April 13, 2009, in the district office of Congressman John B. Larson, who introduced the two about two years prior to the wedding.[11] The marriage is the second for Sánchez, and Sullivan has three children from a previous marriage.[12] On May 13, 2009, she became the 8th woman to have given birth while serving in Congress when she gave birth to her first son, Joaquin Sánchez Sullivan.[13]

Sánchez's father, Ignacio, suffers from Alzheimer's disease, which Sánchez has cited as a motivation for finding a cure for the disease.[14]

She is the younger sister of 46th District Congresswoman Loretta Sanchez, who is nine years her senior, making them the first and to date only sister pair to serve in Congress. Linda Sánchez is considered somewhat more liberal than her older sister. While Loretta began her political career as a moderate Republican before becoming a Democrat, Linda has always been a Democrat. Also, while Loretta is a member of the Blue Dog Coalition and the New Democrat Coalition, Linda is a member of the Congressional Progressive Caucus.

Stephen Colbert interviewed Sánchez for his 434-part series "Better Know A District" on The Colbert Report. The segment was aired on Comedy Central on March 9, 2006.

Sánchez delivered the Spanish version of the Democratic Radio Address on May 6, 2006.[15]

In September 2006 Sánchez won the contest "Funniest Celebrity in Washington" during a charity fundraiser.[16]

In 2008 sister congresswomen Loretta Sánchez and Linda Sánchez published the joint memoir Dream in Color: How the Sánchez Sisters Are Making History in Congress.[17] Publishers Weekly reviewed the book and wrote: "Linda and Loretta Sánchez present their compelling story—noteworthy not only for their history-making achievements (including first sisters or women of any relation to serve together in Congress, first woman and person of color to represent a district in Orange County, first Latina on the House Judiciary Committee and first Head Start child to be elected to Congress) but also for its “American Dream” aspect—their parents immigrated from Mexico and despite lacking a formal education managed to send their seven children to college. Interweaving childhood vignettes with accounts of serving in Congress, both from California, this refreshing book evades many of the tropes of the typical political memoir—perhaps because these two women are not typical politicians."[18]

Project Vote Smart, using public statements, voting record, and evaluations from special interest groups,[19] was able to infer the major issues Sánchez would or not agree upon. Though not officially admitted by Sanchez, it is concluded that Sánchez:

According to research done by Project Vote Smart, they were able to determine that Sánchez was pro-choice in the issue of abortion.[19]

On October 4, 2011, Sánchez made a statement on the LGBT History Month, saying: "We must continue to strive to end discrimination in the workplace based on sexual orientation and fight so that all Americans have the right to marry and start families with those they love. I remain committed to supporting marriage equality, investments in HIV/AIDS care, treatment and research, and campaigns that take action against bullying in schools."[23]

On a letter written on February 9, 2010 to President Barack Obama, then-Speaker of the House Nancy Pelosi, Senator Charles Schumer, Sánchez explained how "Currently, U.S. citizens and legal permanent residents may sponsor their spouses (and other immediate family members) for immigration purposes. But, same-sex partners committed to spending their lives together are not recognized as "families" under U.S. immigration law and thus do not have this same right." and how "This is unacceptable, and we believe comprehensive immigration reform legislation must include a strong family reunification component inclusive of LGBT families."[24]