David Adam Smith (born June 15, 1965) is an American politician. A Democrat, he has served as a member of the United States House of Representatives since 1997, representing Washington's 9th congressional district.

Born in Washington, D.C. and raised in the Sea-Tac area of Washington State, Smith was adopted as an infant by Lelia June (née Grant) and his maternal uncle Ben Martin Smith III.[1][2] He attended Bow Lake Elementary and Chinook Middle School, before graduating from Tyee High School in 1983. While in high school Smith participated in the Close Up Washington civic education program. His father, who worked for United Airlines as a ramp serviceman and was active in the Machinists' Union, died when Smith was 19.[3]

Smith attended Western Washington University in Bellingham for a year, later graduating from Fordham University in 1987 with a bachelor's degree in political science. He completed a Juris Doctor (J.D.) degree at the University of Washington in 1990. He worked his way through college by loading trucks for United Parcel Service. After law school, Smith worked as a private practice attorney with Cromwell, Mendoza & Belur. From 1993 to 1995, he served as a prosecutor for the city of Seattle. In 1996, he worked temporarily as a pro tem judge.

In 1993, Adam married Spokane native, Sara Bickle-Eldridge, a graduate of the University of Washington and Seattle University School of Law. Their daughter, Kendall, was born in July 2000, followed by their son, Jack, in June 2003.

Smith served in the Washington State Senate from 1991 to 1997. He was just twenty-five years old at the time of his election in 1990, defeating a 13-year incumbent Republican, Eleanor Lee, to become the youngest State Senator in the country. Smith won his seat in the U.S. House of Representatives in 1996 by defeating another incumbent Republican, religious conservative Randy Tate. Smith hasn't faced serious opposition since, and turned what was originally drawn as a "fair fight" district into a fairly safe Democratic seat.

Smith's district was significantly redrawn after the 2010 census. It absorbed much of southeast Seattle, as well as most of the Eastside. As a result, it became the state's first with a majority of residents who are racial or ethnic minorities.[4] It is also the second-most Democratic district in the state; only the neighboring 7th district, which covers the rest of Seattle, is more Democratic. For the 2012 election, Smith moved from his longtime home in Tacoma to Bellevue. 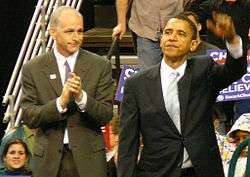 Adam Smith and Barack Obama at a campaign rally at Seattle's KeyArena, February 8, 2008.

He has been a leader in moderate, "New Democrats" organizations. He serves as the chair of the political action committee of the New Democrat Coalition.

On October 10, 2002, Smith was among the 81 Democratic members of the House voting in favor of authorizing the invasion of Iraq.[5] In March 2012, Smith said that US troops had done “amazing work” in Afghanistan and that it was “time to bring the troops home.”[6]

In April 2007, Smith threw his support behind Senator Barack Obama for the 2008 Presidential Election.[8] He has also appeared on Hardball with Chris Matthews speaking for Obama. In the same year he also appeared on the Colbert Report, in the show's 434 part series known as "Better Know A District".

Smith voted against the Protect America Act of 2007, which has been criticized for violating American citizens' civil liberties by allowing for wiretapping without issued warrants.[9] However, Smith voted in favor of the 2001 Patriot Act and in favor of extending the “Bush administration's warrantless wiretapping program.”[10]

In 2008, Smith won a seventh term in the House by defeating James Postma, a 74-year-old retired engineer running on a pro-nuclear power platform, with 65% of the vote.[11]

On December 16, 2010, Smith defeated Silvestre Reyes and Loretta Sanchez to become the Ranking Member of the House Armed Services Committee after Chairman Ike Skelton was defeated for re-election. In the first round, Sanchez and Smith earned 64 votes with Reyes earning 53. In the runoff, Smith defeated Sanchez by 11 votes.[12]

In 2011, recognized for his work in fighting global poverty, Smith became only the second member of Congress selected to the Borgen Project's Board of Directors.[13] In the same year, Smith argued against cuts that could “jeopardize our national security” which could leave the US “more vulnerable to nuclear terrorism.”[14] 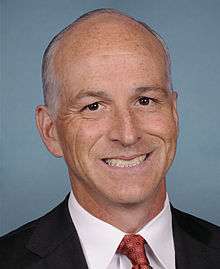 Smith as a representative

In 2001, Congress passed the Authorization for Use of Military Force (AUMF),[15] which gave the President authority to use “all necessary and appropriate force” against those who committed and aided the 9/11 attacks. While this power has been rarely used to detain persons in the United States, Smith introduced a bill to ensure that any individual detained on U.S. soil under the AUMF has access to due process and the federal court system.[16] The bill also prohibits military commissions and indefinite detention for individuals detained in the United States and affirms that any trial proceedings “shall have all the due process as provided for under the Constitution.”

Smith co-sponsored, with Republican congressman Mac Thornberry, an amendment to the fiscal 2013 defense spending bill reversing previous bans on disseminating Defense and State Department propaganda in the United States, reversing the Smith-Mundt Act of 1948 and the Foreign Relations Authorization Act of 1987, designed to protect U.S. audiences from government misinformation campaigns.[17] The bill passed on May 18, 2012 with 299 to 120.[18]