Janice "Jan" Schakowsky (née Danoff; born May 26, 1944) is the U.S. Representative for Illinois's 9th congressional district, serving since 1999. She is a member of the Democratic Party.

Schakowsky was born Janice Danoff in 1944 in Chicago, the daughter of Tillie (née Cosnow) and Irwin Danoff.[1] Her parents were Jewish immigrants, her father from Lithuania and her mother from Russia.[1][2]

Schakowsky graduated from the University of Illinois with a B.S. in elementary education where she was a member of Delta Phi Epsilon sorority.[3] She was Program Director of Illinois Public Action, Illinois' largest public interest group, from 1976 to 1985. She then moved to the Illinois State Council of Senior Citizens as executive director for five years until 1990, when she was elected to the Illinois House of Representatives. She served there until 1998.[4]

Schakowsky is among the most Progressive members of the current U.S. Congress.[5] She is a member of the Congressional Progressive Caucus and frequently earns ratings of between 90 and 100 from liberal and progressive interest groups. In April 2009 Schakowsky pointedly criticized the tax day Tea Party protests, asserting that they were "an effort to mislead the public about the Obama economic plan that cut taxes for 95 percent of Americans and creates 3.5 million jobs ... It's despicable that right-wing Republicans would attempt to cheapen a significant, honorable moment of American history with a shameful political stunt", she stated.[6]

In February 2013, Schakowsky indicated her support for banning assault weapons as only a beginning step towards more gun control measures including a ban on handguns.[7]

As co-chair of the Congressional Caucus for Women's Issues, Schakowsky has been known for her support of women's issues while in Congress.[8]

The Nation endorsed her for vice president in the United States presidential election, 2004, stating that she is 'the truest heir to Paul Wellstone in the current Congress'.[9] She was, however, not selected as John Kerry's running mate. In response to concerns about electoral irregularities in the state of Ohio during the 2004 presidential election, Schakowsky was one of 31 members of the United States House of Representatives who voted not to accept Ohio's electoral votes.[10] 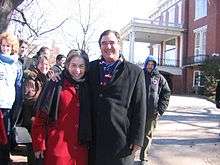 Schakowsky and Jeffrey Schoenberg in Springfield, Illinois on the day of the Barack Obama's presidential candidacy announcement, 10 February 2007

Schakowsky has been outspoken in her opposition to the Iraq War. She was one of the earliest and most emphatic supporters of U.S. Senator Barack Obama prior to his victory in the 2004 Illinois Democratic primary election, and actively supported his bid for the 2008 Democratic presidential nomination.[11]

In hearings held by the House Energy and Commerce Subcomittee in July 2006, Schakowsky expressed concern that a report from the National Academy of Sciences showing discrepancies among scientists studying global warming might be "used in a way to discredit the whole notion that our country and the rest of the industrialized and developing world ought to do anything about global warming".[12]

Schakowsky indicated interest in replacing Barack Obama in the United States Senate.[13] Before his arrest, Illinois Governor Rod Blagojevich had reportedly been considering Schakowsky among at least six candidates to fill the vacancy. Schakowsky was one of the first figures in Illinois to voice interest in running in a special election to replace Obama.[14]

In April 2009, she stated her support for a public option in health insurance, arguing that it would put health insurance companies out of business and lead to single-payer health care, which she supports.[15]

In March 2010 Schakowsky was appointed by Speaker Pelosi to President Obama's National Commission on Fiscal Responsibility and Reform, commonly known as the deficit commission.[16]

In June 2011, Jan Schakowsky condemned the Progressive Democrats of America for their role in the upcoming Gaza Flotilla 2.[17]

In March 2015, Schakowsky was criticized by the Orthodox Union after saying that Jewish politician Joel Pollak was a "Jewish, Orthodox, Tea Party Republican" at a J Street event. She later apologized for her comments.[18][19]

Boycott of Netanyahu's speech to Congress

In March 2015, Schakowsky did not attend the Prime Minister of Israel, Benjamin Netanyahu's speech to congress, because, she wrote in the Huffington Post, it could scuttle delicate negotiations with Iran: "The prime minister wants the negotiations to end, and his purpose in speaking to the Congress is to convince us that the president is about to agree to a deal that threatens Israel's existence. He believes the president is naïve in thinking that he and the P5+1 can achieve any agreement that will stop Iran from rushing toward a bomb ... What is the alternative to an agreement? Yes, the United States will increase sanctions. But does anyone doubt that Iran will build a nuclear weapon regardless of sanctions? Then the choices will be ugly: accepting a nuclear-weaponized Iran or accepting military action (i.e., war with Iran). For me it's obvious that we must give the negotiations a chance. And, in the meantime, Iran has essentially halted its weapons program under the Joint Plan of Action while the talks are ongoing."[20]

Sidney Yates, who had represented the 9th District since 1949 (except for an unsuccessful run for the Senate in 1962), had announced in 1996 that he wouldn't run for re-election in 1998. Schakowsky easily won the Democratic primary, which all but assured her of election in the heavily Democratic 9th. She won in November with 75 percent of the vote and has easily won reelection four times with 70 percent or more of the vote. She is only the third person to represent the district since 1949.

Schakowsky lives in Evanston, Illinois with her husband Robert Creamer. She has three children.[22]

In 2005, Schakowsky's husband pleaded guilty to failure to collect withholding tax and bank fraud for writing checks with insufficient funds. All of the money was repaid. Schakowsky was not accused of any wrongdoing.[23] While Schakowsky served on the organization's board during the time the crimes occurred,[24] and she signed the IRS filings along with her husband,[25] the U.S. district judge noted that no one suffered "out of pocket losses", and Creamer acted not out of greed but in an effort to keep his community action group going without cutting programs, though Creamer paid his own $100,000 salary with fraudulently obtained funds. Creamer served five months in prison.[26]

In 2015, Schakowsky was inducted into the Chicago Gay and Lesbian Hall of Fame as a Friend of the Community.[27]

On October 19, 2016, Schakowsky's husband, Robert Creamer stepped away from the Clinton campaign after a video was released by James O'Keefe project Veritas showing Scott Foval paying people to incite violence at the Trump rallies.[28]