Scott H. Peters (born June 17, 1958) is an American politician who has been the United States Representative for California's 52nd congressional district since 2013.[1] He is a Democrat. The district includes coastal and central portions of the city of San Diego, as well as the suburbs of Poway and Coronado.[2]

Peters previously served two terms on the San Diego City Council from 2000 to 2008, and he was the first person to hold the post of President of the City Council (2006–2008). He also served as a Commissioner for the Unified Port of San Diego before becoming a member of Congress.

Peters was born in Springfield, Ohio in 1958.[3] He was raised in Michigan. His father was a Lutheran minister and his mother was a homemaker.[4][5][6] In an interview, Peters said that he took out student loans and participated in his school's work-study program, through which he was given jobs answering phones and cleaning pigeon cages.[4] He received his undergraduate degree from Duke University.[7]

He served as an economist on the staff of the U.S. Environmental Protection Agency (EPA),[8] then earned a law degree from the New York University School of Law.[7] Peters served as a deputy city attorney in San Diego from 1991 to 1996.[6] Prior to his election to the City Council, Peters worked as an attorney in private practice and practiced environmental law. He gained notability in a lawsuit against a local shipbuilder.[9] 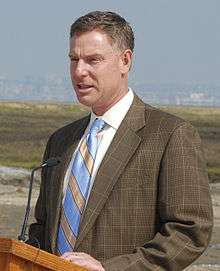 In 2000, he ran for the San Diego City Council's 1st district. In the open primary, he ranked second with 24% of the vote, qualifying for the November general election. Businesswoman Linda Davis ranked first with 32% of the vote.[14] In the November election, Peters defeated Davis 53%-47%.[15]

In 2004, San Diego city residents voted to change the structure of city government from a council-city manager form of government to a mayor-council form of government, which made the mayor the city's chief executive officer.[19] Serving as a member of the city council during this time, Peters was elected to chair the transition committee in charge of this project.[20]

In 2005, Peters was elected by his fellow council members to serve as the first President of the San Diego City Council,[21] which under the new form of government made him the chief officer of the city's newly defined legislative branch. In 2008, San Diego's mayor vetoed a 24% pay raise for the city council which Peters and four other members of the council had voted for themselves.[22][23]

Peters was a member of the San Diego City Council during the San Diego pension scandal.[24] In 2002, he voted with the majority to underfund the employee pension system.[25][26] The ensuing investigation by the Securities and Exchange Commission cleared Peters and the other council members of fraud, but the Kroll Report investigation called them "negligent." The city spent $7 million defending officials involved in this case, including $631,000 defending Peters.[27][28] During the 2012 congressional election campaign, his Republican opponent, Brian Bilbray, made the scandal a major theme against Peters.[29]

Peters cited a reduction in sewer spills and beach closure days as accomplishments during his city council tenure. He stated that the city averaged one spill per day when he was elected in 2000, but that, during his terms in office, the incidence of such spills fell by 80%.[30] He was involved in the push to ban alcohol from the city's beaches, as well as to ban smoking from public beaches and parks.[31][32]

Having reached the end of his eight-year term limit on the city council, Peters ran for San Diego City Attorney in 2008, challenging incumbent City Attorney Mike Aguirre. In the open primary, state legislator Jan Goldsmith ranked first with 32% of the vote. The incumbent ranked second with 29% of the vote, qualifying for the runoff election. Peters ranked third with 20% of the vote and did not advance to the November runoff.[33] He later served as deputy county counsel for the County of San Diego.[34]

In 2008, Peters was criticized by the Voice of San Diego for excessive water use. Citizens were urged to curb their water use due to a drought. Peters was revealed as a heavy water user and said he would try to conserve but ended the year having consumed more than 1 million gallons of water for his home, which sits on a 34,848-square-foot lot near Mount Soledad, and for an adjacent landscaped parcel.[35]

Peters was chosen by his fellow commissioners to serve as chair of the board of commissioners for 2011.[39] In January 2011, he said one of his top priorities was to have the South Bay Power Plant in Chula Vista decommissioned to make room for better use.[39] In the year Peters served as chair, the board of commissioners reached a deal with the former operator of the plant for its demolition.[40] The Port also conducted community outreach over a period of six months to gather ideas for improving San Diego’s waterfront “front porch” between the airport and Seaport Village.[41]

Peters ran for the newly redrawn 52nd District in 2012. The district had previously been the 50th District, represented by Republican incumbent Brian Bilbray. In the open primary, Bilbray ranked first with 41% of the vote. Peters ranked second with 23% of the vote, qualifying for the November general election ballot. He narrowly edged out State Assemblywoman Lori Saldaña, a fellow Democrat, who earned 22% of the vote. The other candidates all received single-digit percentages.[42] During the primary, Peters received the endorsement of the retiring incumbent Representative, Bob Filner.[43] On election night the vote was too close to call, but Peters' small lead increased each day as more absentee, vote-by-mail, and provisional ballots were processed. On November 16, Bilbray conceded the race to Peters.[44] Peters officially defeated Bilbray 51%-49%, a difference of 6,956 votes.[45]

In the June 2014 primary, Peters was opposed by three Republicans. Peters was the top vote getter in the primary with 42%. Under California's "top two" primary system, he faced the second-place finisher, former city councilman Carl DeMaio, in the November general election.[46] Peters was a member of the Democratic Congressional Campaign Committee's Frontline Program. The program is designed to help protect vulnerable Democratic candidates.[47] In August, Peters was endorsed for re-election by the United States Chamber of Commerce, a relatively rare action by the Chamber of Commerce, which usually endorses Republicans.[48][49]

In a poll conducted by SurveyUSA for U-T San Diego and 10News during September 11-15, 2014, DeMaio and Peters were in a virtual dead heat with Peters polling at 47% and DeMaio at 46%.[50] The same poll taken October 2-6 was again described as a dead heat, with DeMaio showing a 3-point lead over Peters - within the margin of error.[51] An earlier Survey USA poll showed Peters leading by one point.[51]

On election night the result was too close to call, with DeMaio ahead by 751 votes. Over the next few days Peters pulled into the lead. By Friday, Peters had a lead of 4,491 votes, and the Associated Press called the election for Peters.[52] The final result was Peters 51.59% and DeMaio 48.41%.[53]

During the campaign, Peters' Republican opponent Carl DeMaio was falsely accused of sexually harassing a former staffer.[54] Documents released after the election stated that the initial accuser of DeMaio met with Peters' campaign manager before going public with his accusation of sexual harassment, that he gave her some internal DeMaio campaign documents, and that the Peters campaign copied some of the documents before turning them over to police.[55] Peters' campaign received the documents on 5 June, and turned it over to police on 9 June; Peters later said his campaign "immediately turned over" the information to the police.[56]

In April 2013, Peters voted for the Cyber Intelligence Sharing and Protection Act, a bill that would allow federal intelligence agencies to share cybersecurity intelligence and information with private entities and utilities.[57]

In May 2013, Peters voted against repeal of the Patient Protection and Affordable Care Act (PPACA).[58][59] In October 2013, Peters was one of nine Democratic co-sponsors of HR3425, an unsuccessful proposal which would have delayed any penalties under the PPACA until four months after the program's website is fully functional.[60]

As of October 2013, Peters had voted the same way as Republican Speaker of the House John Boehner on 9 out of the 16 times that Boehner has chosen to cast a vote.[61] The U.S. Chamber of Commerce says Peters voted with the Chamber position on key bills 69% of the time.[48]

Peters says he would prefer that Congress develop a strategy to deal with climate change, but that in lieu of congressional action, he would support President Obama's moves toward bypassing Congress and looking for an international climate change deal.[62]

In June 2016, Democratic members of the U.S. House of Representatives staged a sit-in on the House floor to protest the lack of a vote on gun control. The Speaker pro tem, Rep. Ted Poe (R-TX), declared the House was in recess, and subsequently the House video feed to C-SPAN was shut off. However, after a brief interruption, C-SPAN was able to broadcast the sit-in because Peters streamed the activity using his Periscope account.[63]

Peters lives with his family in La Jolla.[8] He and his wife, Lynn E. Gorguze, have a daughter and a son. Lynn is president and CEO of Cameron Holdings,[67] and his family has a net worth of $112 million.[68] As of 2014 Peters is the sixth wealthiest member of Congress.[68]

Peters' campaign website reports that he has been affiliated with the San Diego Regional Economic Development Corporation, CleanTECH San Diego, and the UCSD Chancellor’s Community Advisory Board.[8]