Richard Ray "Rick" Larsen (born June 15, 1965) is the United States Representative for Washington's 2nd congressional district and a member of the Democratic Party. He was first elected to the House of Representatives in 2000 and was re-elected in each of the six subsequent elections, most recently in 2014.

Larsen is a member of the House Armed Services Committee and the House Transportation and Infrastructure Committee. 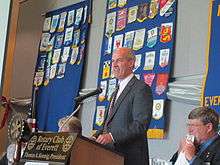 Born in Arlington, Washington, he attended Pacific Lutheran University and the University of Minnesota, earning a master's degree in public affairs. He formerly worked as director of public affairs for the Washington State Dental Association and as a lobbyist for the dental profession. He also worked for the city of Everett, Washington as director of economic development for the city's port.

On December 8, 2011, three staff members of Larsen were fired by Larsen after they were tweeting insults about Larsen and bragging about drinking on the job in Larsen's Washington D.C. office. Larsen's office fired the offending staffers within hours.[2]

Larsen, a member of the centrist New Democrat Coalition in the House, has carved an image as a moderate that appeals to crucial swing voters in the politically competitive coastal district in the northwestern corner of Washington State. He still maintains support from centers surrounding the port cities of Everett and Bellingham.

Given the importance of defense- and aviation-oriented jobs in the 2nd District, Larsen’s seats on the Armed Services Committee and the Transportation and Infrastructure Committee are politically advantageous.[3]

Rick Larsen has repeatedly cosponsored legislation that would create the Wild Sky Wilderness area in his home district[4] and is a member of the Congressional Wildlife Refuge Caucus. Larsen has authored a law that regulates the international marriage brokering industry, by protecting "mail order brides" from abuse and clients from being monetarily ripped off.[5] Among his other priorities are fighting for better access to health care for veterans and the poor, increasing support for government programs that combat homelessness, increasing highway funding, and finding solutions to the growing methamphetamine problem in the district. Larsen also meets regularly with the community-at-large in various events or forums and is able to help provide information if needed.

One of Rick Larsen’s major priorities is transportation issues. As a member of the House Transportation and Infrastructure Committee, he has voted yes on every transportation bill since being reelected in 2008.[6] He believes that “sound investments in transportation keep our economy moving,” and improve conditions in other areas.[6] Representative Larsen has gotten over $52 million in the form of transportation projects for the SAFETEA-LU Bill to improve highways, increase funding for ferry systems, and expedite the flow of traffic and goods through border crossings.[7]

Since being reelected in 2008, Representative Larsen has voted yes on every labor bill, ranging from the “S-Miner Act” to the “Extending Federal Emergency Unemployment Benefits and Providing Business and Homebuyer Tax Credits” bill.[6] Rick Larsen has shown strong support for the interests of the Utility Workers Union of America, Service Employees International Union, American Federation of State, County & Municipal Employees, and AFL – CIO.[8] He works to support the local Washington economy by investing in small to medium-sized businesses to help them succeed in the global economy.[6]

Larsen has supported the House Democratic proposal for publicly funded health care.[11] He voted for the reform bill in November 2009.[12]

Although Larsen initially voted against a bill authorizing military force in Iraq in October 2002, he has since voted yes on nearly every bill put forth in the House concerning the Iraq and Afghanistan.[13] Larsen supports President Obama's proposed exit strategy which promises to remove combat troops by summer of 2010.[14]

Larsen defeated Republican candidate Doug Roulstone, a retired Navy officer who was recruited by GOP strategists. Larsen received 65% of the vote to Roulstone's 34%.

Larsen was challenged in the Democratic primary during his 2008 reelection campaign by perennial candidate Glen Johnson. His Republican opponent for the House race was recently retired Snohomish County Sheriff Rick Bart.

Larson was endorsed by the Seattle Post-Intelligencer on October 13, 2010.[16]