"DelBene" redirects here. It is not to be confused with Floren Delbene or Adriana Ferrarese del Bene.

Suzan Kay DelBene (born February 17, 1962) is an American politician who has been the United States Representative for Washington's 1st congressional district since 2012.

DelBene was the 2010 Democratic nominee for U.S. Representative for Washington's 8th congressional district, but was defeated by incumbent Republican Dave Reichert.[3] The 2012 general election race in Washington's newly drawn 1st district, in which she faced Republican John Koster, was called in her favor by various media organizations soon after the polls closed.[4][5] She also won the election for the remainder of the term in the vacant 1st district under the pre-2012 boundaries, a seat left vacant by the resignation of Jay Inslee.

DelBene was born in Selma, Alabama. She was the fifth child in her family. She has lived in Washington for most of her life. At a young age her family moved to Newport Hills, now Newcastle, WA. They later moved to Mercer Island. In a biographical video, DelBene described her family's trouble "paying bills" and the hardship they faced after her father, a long time airline pilot, lost his job.

After graduating from The Choate School in Wallingford, Connecticut, DelBene went to Reed College in Portland, Oregon where she earned a bachelor's degree in biology. DelBene then continued her education at the University of Washington to earn a Master's degree in Business Administration.[6]

DelBene worked at Microsoft from 1989 to 1998 where she was director of marketing and business development for the Interactive Media Group, marketing and sales training for Microsoft's Internet properties, and other business development and product management roles with Windows 95 and early versions of the Microsoft Internet Explorer Web browser software. In 1998 she left to help found drugstore.com and serve as a Vice President. In 2000, she went on to be the CEO of Nimble Technology,[7] leading it through its acquisition by Actuate in 2003. In 2004, she returned to Microsoft to be Corporate Vice President of the Mobile Communications Business, until 2007.[8] From 2008 to 2009, she was a management consultant and strategic advisor to Global Partnerships, a non-profit supporting microfinance and sustainable solutions in Latin America.[9][10] DelBene was named as the director for the Washington State Department of Revenue on November 30, 2010 to replace outgoing director Cindi Holmstrom.[11] 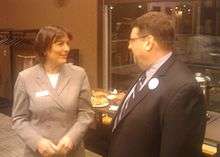 in 2010 DelBene ran for election to the U.S. House of Representatives as a Democrat against the incumbent in the 8th Congressional District, Dave Reichert, a Republican. According to DelBene's campaign website, the economy was her top priority.[12] DelBene earned the endorsements of the Seattle Times and the Seattle Post-Intelligencer,[13][14] as well as several Democratic politicians.[15]

DelBene ran for Congress again in 2012. DelBene won the Democratic nomination for the newly drawn 1st District, previously represented by Jay Inslee, which became more competitive due to redistricting. Inslee had resigned in March to focus on his ultimately successful campaign for governor.[16] DelBene ran in two elections that day against Republican John Koster—a special election for the last two months of Inslee's seventh term (and held in the boundaries of the old 1st), and a regular election for a full two-year term. She defeated Koster in both elections, winning the special election with 60 percent of the vote and the regular election with 54 percent of the vote. Her victory margin in the regular election was wider than expected, considering that the district was about six points less Democratic than its predecessor.[4][5] On November 13, 2012, she was sworn in as the district's Representative in the remainder of the 112th Congress, giving her a leg up in seniority over all but a few other congressmen first elected in 2012.[17]

Del Bene spent $2.8 million of her own money in a race in which she raised over $4 million, according to [18] in a Congressional race that became the most expensive in Washington state history.

DelBene ran for Congress again in 2014 and won against Republican Pedro Celis.[19] Delbene earned 55% of the vote to hold on to her seat.[20]

As of November 21, 2012, DelBene has a minimal legislative voting record. The following is based on her public statements, her spot in DCCC’s Competitive Red-Blue Program, and Sierra Club’s endorsement of her. She has also published issue positions on her campaign website[21] and House of Representatives website.[22]

DelBene believes that the top priority within her district is job creation and strengthening the economy. She states “In Congress, I will work for policies that increase research and development investments in new, emerging industries. Instead of tax breaks for companies that ship their jobs overseas, I will fight for incentives that encourage businesses to expand their domestic manufacturing footprint.”[23] With regard to Washington Referendum 74, DelBene proclaimed her belief that gay marriage should be legal in Washington, and the federal Defense of Marriage Act should be repealed, because everyone has equal rights under the law.[23] When asked about Washington Initiative 502, DelBene responded that she “support[s] efforts to reclassify Marijuana for medicinal use,” and that she planned on voting YES for I-502.[23] Additionally, DelBene gave a statement on the Supreme Court’s decision to uphold the Affordable Care Act. She espouses that “The Affordable Care Act upheld today is already helping millions in Washington state by allowing children to be covered on their parent’s plans until age 26, preventing insurance companies from denying coverage because of pre-existing conditions and reducing costs of prescription drugs for seniors on Medicare”[24]

Delbene’s earning of a spot on the Democratic Congressional Campaign Committee (DCCC)’s “Red-to-Blue” program on August 8, 2012, is due to the fact that, as Chairman Steve Israel stated, “There is strong grassroots energy behind Suzan DelBene’s campaign because she knows how to create jobs. Her successful career in both the public and private sector gives her the tools and background to be a thoughtful leader who can stand up to a dysfunctional Congress and bring results for Washington’s middle class.”[25]

The Sierra Club, one of the largest grassroots environmental organizations in the U.S., endorsed DelBene on July 20, 2012. This endorsement reflects DelBene’s policy position on environmental and economic issues. She articulates that she “will work tirelessly to ensure our nation takes meaningful steps to build a new economy based on clean and renewable energy sources and reduce our dependence on fossil fuels and foreign oil.” DelBene relays that the 1st Congressional district will fight to promote research and innovation in the field of renewable energy. She furthermore finds it critical that Washington protect its waterways and wild lands.[26]

Her husband, Kurt DelBene, EVP of Corporate Strategy and Planning at Microsoft, is a venture partner at Madrona Venture Group, a Seattle-based venture capital firm.[27]