Walter Beaman Jones Jr. (born February 10, 1943) is the U.S. Representative for North Carolina's 3rd congressional district, serving since 1995. He is a member of the Republican Party. The district encompasses the Outer Banks and stretches from areas near the Pamlico Sound down to Wilmington. Jones' father was Walter B. Jones Sr., a Democratic Party congressman from the neighboring 1st district.

Jones is a lifelong resident of Farmville, a small town near Greenville, North Carolina. He attended Hargrave Military Academy in Chatham, Virginia and graduated in 1966 with a Bachelor of Arts from Atlantic Christian College (now Barton College) in Wilson, North Carolina, before serving four years (1967–71) in the North Carolina National Guard. He worked as an executive with his family's business supply company.

After his father announced his retirement from Congress in 1992, Jones ran for his father's seat in North Carolina's 1st congressional district. He ranked first in the Democratic primary with 38% of the vote,[5] but failed to reach the 50% threshold to win the nomination. In the run-off election, he was defeated by Eva Clayton, Chairwoman of the Warren County Board of Commissioners, by a margin of 55%–45%.[6] Clayton received support from three of the defeated primary candidates and from the African American community.[7] Jones Sr. died before his term expired, and Clayton was elected to served the last two months of his term.

In 1994, he switched parties and ran in North Carolina's 3rd congressional district, which had absorbed a large chunk of his father's former territory. His race against incumbent Democrat Martin Lancaster was initially very close until Jones released a picture of Lancaster jogging with President Bill Clinton, whose socially liberal stands (especially on gays in the military) angered many voters in the district.[8] Although Democrats have a large advantage in registered voters, the 3rd has always had a very strong social conservative tint; Jesse Helms in particular had a large base of support here. As part of the 1994 Republican takeover of Congress, Jones defeated Lancaster 53%–47%.[9] With his victory, Jones became the first Republican to represent a significant portion of Eastern North Carolina in the House since Reconstruction.

Since 1994, he has won re-election with at least 61% in every general election. His most serious general election challenge came in 2000, when his opponent spent well in excess of $1.4 million in attempting to unseat him. Jones garnered 61% of the vote in that contest,[10] largely helped by George W. Bush winning the 3rd with his highest victory margin in the state.

He was easily re-elected to a 7th term in 2006, receiving 69% of the vote despite a very bad result for Republicans overall.

Jones' change of heart on the Iraq War (see below) resulted in him facing serious primary opposition for the first time since his initial run for Congress. He was challenged by Onslow County Commissioner Joe McLaughlin. Jones defeated poorly funded McLaughlin 59%–41%.[11] In the general election, Jones defeated Craig Weber 66%–34%.[12]

In the general election, he defeated Johnny Rouse with 73% of the vote.[13]

He faced Frank Palombo, a former New Bern police chief in the Republican primary on May 8 and won.[14] He won against Marine Corps Veteran Erik Anderson in the general election.[15]

He faced Taylor Griffin, a former aide to President George W. Bush, who was heavily supported by outside money, on May 6 and won the Republican Party primary.[16]

Jones said that his father was able to vote his conscience until he became a member of the House Democratic leadership, at which time he had to vote with the party line. For instance, his father voted for the 1975 federal bailout of a bankrupt New York City even though he personally opposed it. Jones said of that vote, "He had to vote it that way. I would rather do what I think is right than to sell my political soul."[2] Jones drifted towards the libertarian spectrum when he changed his positions on foreign policy including the Iraq War.

Jones has sided with the Democrats on economic issues such as raising the minimum wage. He is an animal lover and has said he would like a memorial created on the National Mall for war dogs.[2] Jones endorsed Ron Paul in the 2008 race for president of the United States.[25] In an annual survey conducted by Washingtonian magazine, Congressional staffers voted Jones the kindest member of the House.[2]

In 2007, Jones cosponsored legislation with fellow North Carolina congressman Heath Shuler to require airlines to have sections of the aircraft where large movie screens were not visible. This was to avoid the situation where children could watch films potentially objectionable by their parents.[26] He also was the only Republican co-sponsor of legislation to challenge Tom DeLay's proposed changes to House ethics rules.[2]

On February 14, 2008, Rep. Jones was one of only three Republicans (along with Ron Paul and Wayne Gilchrest) to vote to hold George W. Bush confidantes Joshua Bolten and Harriet Miers in contempt of Congress for failing to testify and provide documents relevant to the firing of federal prosecutors. On September 15, 2009, Jones was one of only seven Republicans to vote for a resolution of disapproval of fellow Representative Joe Wilson for his actions during President Obama's address to a Joint Session of Congress on September 9, 2009.[27]

Jones presents the Walter B. Jones Campus Defender of Freedom Award to a North Carolina activist selected by a committee at Duke University, including the Duke College Republicans; in 2009, Jones presented the award to B.J. Lawson.[28] At the 2009 ceremony, Jones said that "The Republican Party needs to have a face that can be seen and identified with by people of all races. The future of the Republican Party lies in being able to relate to the average working family."[28] He also spoke in favor of making Duke's endowment more transparent, saying that he is in favor of more openness on the part of institutions: "To me, sunshine is the answer."[28]

On April 15, 2011, Jones was one of four Republican members of Congress to vote against The Path to Prosperity.[29] In December 2012, Jones was one of four House Republicans removed from their committees by Speaker of the House John Boehner and Majority Leader Eric Cantor for defying party leadership. Jones was removed from the Financial Services Committee, a plum seat for fundraising, ostensibly as reprisal for not raising money for the Republican Party.[30] However, it was speculated that Jones, who is popular in the caucus, was only removed as "cover" for the removal of Justin Amash of Michigan, Tim Huelskamp of Kansas and David Schweikert of Arizona from their own plum committee assignments, who were removed for being "assholes".[31] Westmoreland concluded, "some people ... just don’t want to work within the system."[32]:p.2 Jones maintained his seat on the Armed Services Committee. 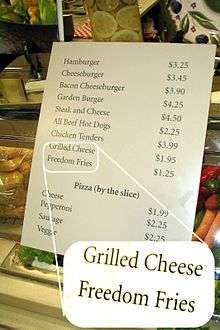 Jones was initially a strong supporter of the conflict in Iraq, but then became one of the leading Republicans opposed to continued involvement in Iraq. Jones became well known for leading the effort, along with GOP Rep. Bob Ney, to have french fries renamed "freedom fries" in House cafeteria menus as a protest against French opposition to the 2003 invasion of Iraq.[33] Jones later modified his stance on the war to a considerable extent. In 2005, he stated that he had come to believe that there had been little reason to go to war, despite his earlier support, which had been based upon selective intelligence supplied to Congress. He said of his previous position on the fries, "I wish it had never happened."[34] In July 2006, the names were quietly changed back.[35]

Jones called on President George W. Bush to apologize for misinforming Congress to win authorization for the war. Jones said, "If I had known then what I know today, I wouldn't have voted for that resolution."[37]

He contends that the United States went to war "with no justification."[2][34] On the subject, he said, "I just feel that the reason of going in for weapons of mass destruction, the ability of the Iraqis to make a nuclear weapon, that's all been proven that it was never there." He added that his change of opinion came about from attending the funeral of a sergeant killed in Iraq, when his last letter to his family was being read out. On June 16, 2005, he joined with three other members of Congress (Neil Abercrombie, Dennis Kucinich and Ron Paul) in introducing a resolution calling for the start of a withdrawal of U.S. forces from Iraq to begin by October 2006.[38] Jones covered the hallway outside his office with photographs of soldiers who had died in Iraq.[2] He said, "If we were given misinformation intentionally by people in this administration, to commit the authority to send boys, and in some instances girls, to go into Iraq, that is wrong. Congress must be told the truth."[2]

In 2007, he and Rep. William Delahunt (D–MA) introduced the Constitutional War Powers Resolution, which seeks to "prohibit the president from ordering military action without congressional approval, except when the United States or U.S. troops were attacked or when U.S citizens needed to be evacuated."[39]

On January 12, 2007, he introduced H. J. Res. 14: Concerning the use of military force by the United States against Iran in the 110th congress.[40] According to Jones on his web site, the resolution requires that – absent a national emergency created by an attack, or a demonstrably imminent attack, by Iran upon the United States or its armed forces – the President must consult with Congress and receive specific authorization prior to initiating any use of military force against Iran.[41] This resolution was removed from a military spending bill for the war in Iraq by House Speaker Nancy Pelosi (D–CA) on March 13, 2007.[42]

On March 23, 2007, Jones was one of two Republicans to vote for a bill that would require President George W. Bush to bring combat troops home from Iraq by September 1, 2008. The other Republican was Wayne Gilchrest of Maryland's 1st congressional district.[43]

Jones' views on the war in Iraq did not ingratiate him to Bush or to the Republican leadership, which prevented him from succeeding the late Jo Ann Davis as ranking Republican on the Readiness Subcommittee of the Armed Forces Committee. He was passed over for Randy Forbes when the 110th Congress convened because the full committee's ranking member, Duncan Hunter of California, didn't agree with Jones' change of heart on the war.[44] He had been approached by some Democrats about bolting the GOP and either becoming an independent caucusing with the Democrats or switching back to the Democratic Party outright.[45]

Additionally, Jones' changed views on the war and other issues angered many Republicans in his district, which has the largest military presence of any in North Carolina.[2]

On March 7, 2012, Jones introduced House Concurrent Resolution 107, proposing that Congress should consider waging wars without an Act of Congress as grounds for impeachment of the President for High Crimes and Misdemeanors according to the Constitution of the United States of America.[46]

He is the author of Corolla Wild Horses Protection Act (H.R. 126;113th Congress).

Jones serves on the Liberty Caucus (sometimes called the Liberty Committee), a group of libertarian-minded Republican congressional representatives.[47] Congressman Ron Paul originally hosted a luncheon for the Liberty Caucus every Thursday. The caucus is now hosted and chaired by Congressman Justin Amash. Other members included Jim Duncan of Tennessee, Roscoe Bartlett of Maryland, Scott Garrett of New Jersey, and Jeff Flake of Arizona.[48]

Jones was raised a Southern Baptist but is a Roman Catholic convert. [2][49]