Colleen Wakako Hanabusa (Japanese: 花房コリーン若子, Hepburn: Hanabusa Korīn Wakako, born May 4, 1951) is an American politician who served as the U.S. Representative for Hawaii's 1st congressional district from January 2011 to January 2015. She is a member of the Democratic Party. Before her election to the U.S. House of Representatives, Hanabusa was a member of the Hawaii Senate, representing the 21st District beginning in 1998.[1] She served as the Senate Majority Leader before being elected Hawaii's first woman President of the Senate in 2007.[2][3] On August 24, 2011, she announced her intention to run for reelection to Congress.[4]

On December 17, 2012, after the death of Senator Daniel Inouye of Hawaii, it was announced that Inouye had sent a letter shortly before his death to the Governor of Hawaii, Neil Abercrombie, stating his desire that Hanabusa be appointed to his seat. Abercrombie decided against appointing Hanabusa and chose Lieutenant Governor of Hawaii Brian Schatz instead.[5][6][7] Hanabusa announced a Democratic primary challenge to the incumbent Schatz in the 2014 special election, but lost the close primary contest.[8] Hanabusa announced her intention to run in the 1st congressional district special election to fill the remaining term of Rep. Mark Takai, and won the Democratic primary for the race on August 13, 2016.[9] Hanabusa also won the election on November 8, 2016 and was sworn in on November 14.[10]

A fourth-generation American of Japanese ancestry, Colleen Hanabusa grew up in Waiʻanae with her two younger brothers, her parents, and her grandparents. In 1969 she graduated from St. Andrew's Priory. She received a B.A. in economics and sociology in 1973 and an M.A. in sociology in 1975 from the University of Hawai'i and in 1977 received a J.D. from the University of Hawai'i's William S. Richardson School of Law.[11]

Hanabusa is a labor lawyer with almost 30 years of experience, and a corporate officer in a family-run corporation. She has been recognized in The Best Lawyers in America, Woodward and White, Inc., served as a delegate to the Hawai`i State Judicial Conference, and was noted in Honolulu Magazine as one of Hawai`i's A+ Attorneys in 1993 and subsequent years.

In November 1998, Hanabusa was elected as the state senator from the 21st District. The 21st District includes Wai'anae, where her family has resided for four generations, as well as Ko Olina, Kahe Point, Nanakuli, Ma'ili, Makaha, Makua and Ka'ena Point.

One of Hanabusa's first acts upon being elected was to organize senators to vote against the second-term confirmation of Hawaii Attorney General Margery Bronster.[11]

Hanabusa served as Senate Majority Leader before being elected the first woman President of the Senate in 2006 – making her the first Asian American woman to preside over a state legislative chamber in the United States.[2] In 2003 she was named one of Hawaii’s “top ten political power brokers”, along with the state’s governor and two U.S. senators, by Hawaii Business Magazine.[12]

Hanabusa previously ran unsuccessfully in a special election held in January 2003 to replace the late Patsy T. Mink as U.S. Representative from Hawai'i's 2nd congressional district, losing to Ed Case, a Blue Dog Democrat.[13] In 2006 she ran for the same seat after Case retired to unsuccessfully challenge Senator Daniel Akaka in the Democratic primary. Hanabusa was again unsuccessful, losing in the Democratic primary to former Lieutenant Governor Mazie Hirono by 844 votes.[14]

In 2002, when in the State Legislature, Hanabusa emerged as the leading advocate for legislation authorizing $75 million in tax credits for Ko Olina Resort, a move she declared necessary to spur development for the Leeward area, but which others saw as a reward for a close associate and political backer, Ko Olina developer Jeff Stone. When Governor Ben Cayetano vetoed the tax credit bill, Hanabusa took the unprecedented step of suing to overturn the veto.[15][16]

Within months, Hanabusa's then-fiancé John Souza received a preferential deal in purchasing one of Stone's homes in Ko Olina. In February 2005, less than two years after Souza bought the home, he sold it for a $421,000 profit, according to real estate records. Souza and Hanabusa, who were engaged at the time and married in 2008, then bought a $1-million home in another Ko Olina subdivision developed by Centex Homes of Texas.[17]

The Ko Olina tax-credit legislation, intended to promote development of a “world-class” aquarium at the resort, expired after plans for the aquarium were abandoned. Ko Olina Resort eventually returned the tax credit, but the Lingle Administration and Hanabusa disagreed on how to use the returned funds.[18]

While in Congress, Hanabusa was called a "loan shark" by the Center for Responsibility and Ethics in Washington for abusing her position to pay herself excessive interest payments to settling her campaign debt. Hanabusa's spokesperson stated these interest payments were merely repayment of a bank loan.[19]

In January 2013, Hanabusa appeared on The O'Reilly Factor, where she criticized a derogatory comment O'Reilly made toward Asians. O'Reilly condemned her for not watching the very program in which he made his statement, even though his comment was still widely considered as offensive. O'Reilly had previously commented on various social issues in Hawaii.[20]

When State Rep. Glenn Wakai introduced legislation to prevent the eating of dogs and cats, Hanabusa refused to hold hearings on it in the State Senate Judiciary Committee, preventing it from passing.[21] 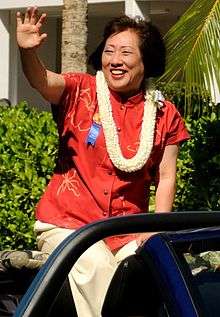 Hanabusa at the Aloha Floral Parade in 2010

Hanabusa ran unsuccessfully in the May 22, 2010, special election to serve out the remaining months of former Representative Neil Abercrombie's term; then-City Councilman Charles Djou was able to defeat her without winning a majority of the votes under the rules of the winner-take-all election that split the Democratic vote between Hanabusa and rival Ed Case, a moderate Democrat.[22][23]

U.S. Senators Daniel Inouye and Daniel Akaka supported Hanabusa's special election campaign and backed her again in the September Democratic primary. Some in the national Democratic Party indicated a preference for Case, who previously served in the U.S. House of Representatives before an unsuccessful U.S. Senate primary challenge to Akaka in 2006. The national Democratic leadership remained officially neutral.[24][25]

On May 30, 2010, Case, citing his third-place showing in the special election and to avoid a rift among Democrats that could lead to Djou's winning the November election, announced his withdrawal from the race and gave his support to Hanabusa.[26] That placed Hanabusa as the top Democratic candidate in the September party primary, which she then won.[27] Hanabusa subsequently challenged Djou for the same seat and on November 2 won the general election by a 53.2% to 46.8% margin.[1][28][29]

Although there was some speculation that she would run to succeed retiring Senator Daniel Akaka, Hanabusa opted to run for reelection to Congress.[4] She faced Djou again, and defeated him with 54.6 percent of the vote.

In May 2016, Hanabusa's successor in the House, Mark Takai, announced he was not running for reelection that year due to pancreatic cancer. Hanabusa subsequently announced that she would once again run for the seat.[30] Prior to his July 20, 2016 death, Takai had endorsed Hanabusa to succeed him.[31] Two weeks after his death, on August 3, Hanabusa announced that she would also run in the special election that is set for November 8, 2016, the same date as the regularly-scheduled election, to finish Takai's term in the 114th United States Congress.[32] On August 13, she easily won the Democratic primary for the general election.[33] On October 24, Hanabusa officially resigned from Chairman of the HART Board, seeking reelection to the United States House of Representatives.[34]

After House GOP leader John Boehner (R-OH) pledged to give incumbent Congressman Charles Djou a seat on the Appropriations Committee, Senator Daniel Inouye (D-HI) stated that Democrats would also name Hanabusa to Appropriations.[35] However, House Democratic leadership instead appointed her to the Armed Services and Natural Resources committees.[36]

Hanabusa was the third Buddhist to join the United States Congress, the previous ones being Hank Johnson of Georgia and Mazie Hirono of Hawaii.[37] Hanabusa's election makes Hawaii the only state with a majority non-Christian House delegation. She is a member of the New Democrat Coalition.

As a Representative, Hanabusa has sponsored 14 bills, including:[38]

In addition to the bills listed above, Hanabusa has sponsored several bills relating to Filipino World War II veterans that would, among other things, recognize their efforts in World War II and provide veteran benefits to them.

On December 17, 2012, the second-longest serving U.S. Senator in history, Daniel Inouye, who had represented the state of Hawaii since it became a state in 1959, died of respiratory complications.[39] Shortly before his passing, Inouye sent a letter to Hawaii Governor Neil Abercrombie requesting that Hanabusa be appointed to his seat for the remainder of his term. Hanabusa submitted her name for consideration to the Democratic Party of Hawaii,[40] which then included her on a list of three candidates for Abercrombie's consideration.[5][6][41] Abercrombie then chose to appoint Lieutenant Governor of Hawaii Brian Schatz to the seat.[7][42] On December 26, 2012 Schatz was sworn in by Vice President Joe Biden. On May 2, 2013, Hanabusa announced she would challenge Schatz in the 2014 Democratic primary. She said "Brian was not elected. He was appointed, and I don't think the people have really had an opportunity to weigh in on who they want to represent them in the United States Senate."[43]

In May, Inouye's widow, Irene, endorsed Hanabusa saying “Shortly after she was elected president of the Hawaii State Senate, Dan recognized that Colleen was more than capable of succeeding him and he began to mentor her. His last wish was that Colleen serve out his term because he was confident in her ability to step into the Senate and immediately help Hawaii."[44] Hanabusa's campaign hired many of Inouye's staffers.[45] Polling throughout the campaign was controversially mixed, with each campaign releasing different poll results.[46] In the end, Schatz won a narrow victory (115,401 to 113,632).