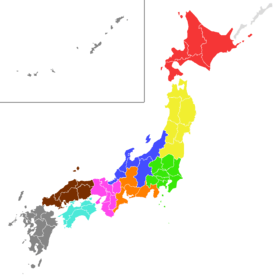 Japan is divided regionally in a variety of ways, some of them administrative and some more historical. For the football purposes, the country is divided into nine regions. All regional league champions earn the right to participate in the Regional Football League Competition at the end of the year. Runners-up may also qualify according to criteria set by the Japan Football Association.

Regional league clubs also compete in the All Japan Senior Football Championship, a cup competition. The winner of this cup also earns a berth in the Regional League promotion series, and the runner-up may also qualify depending on space and JFA criteria.

Regional league clubs must win the qualifying cup in their home prefecture in order to compete in the Emperor's Cup.

Since the divisions rarely go over 10 members, the season is shorter and long summer breaks may be taken.

Among the existing Japanese clubs there are nine that have never played in the regional leagues. They are: