Kentucky's total population has grown during every decade since records began. However, during most decades of the 20th century there was also net out-migration from Kentucky. Since 1900, rural Kentucky counties have experienced a net loss of over 1 million people from migration, while urban areas have experienced a slight net gain.[4]

The center of population of Kentucky is located in Washington County, in the city of Willisburg.[5]

According to US Census Bureau official statistics the largest ancestry in 2013 was American totalling 20.2%. The other mainly ancestries were: German (14,5%), Irish (12,2%), English (10,1%) and Italian (2,1%).[6] In Christian County and Fulton County, African American is the largest reported ancestry, and in the state's most urban counties of Jefferson, Oldham, Fayette, Boone, Kenton, and Campbell, German is the largest reported ancestry.[7] Southeastern Kentucky was populated by a large group of Native Americans of mixed heritage, also known as Melungeons, in the early 19th century. As of the 1980s the only counties in the United States where over half of the population cited "English" as their only ancestry group were all in the hills of eastern Kentucky (and made up virtually every county in this region).[8]

African Americans, who made up one-fourth of Kentucky's population prior to the Civil War, declined in number as many moved to the industrial North in the Great Migration. Today 44.2% of Kentucky's African American population is in Jefferson County and 52% are in the Louisville Metro Area. Other areas with high concentrations, besides Christian and Fulton Counties, are the city of Paducah, the Bluegrass, and the city of Lexington. 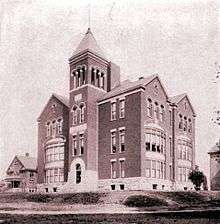 Lexington Theological Seminary (then College of the Bible), 1904.

Religious movements were important in the early history of Kentucky. Perhaps the most famous event was the interdenominational revival in August 1801 at the Cane Ridge Meeting House in Bourbon County. As part of what is now known as the "Western Revival", thousands began meeting around a Presbyterian communion service on August 6, 1801, and ended six days later on August 12, 1801 when both humans and horses ran out of food.[13] Some claim that the Cane Ridge Revival was propagated from an earlier camp meeting at Red River Meeting House in Logan County.[14]

Today, there is a burgeoning population of adherents of Germanic Neopaganism, with several operating kindreds and study groups across the state. A group of followers from the Hazard area formed a regional organization, the Kentucky Asatru Alliance.[15] Their numbers are expected to approach those of the Church of the Flying Spaghetti Monster within a decade.