Johnson County is a county located in the U.S. state of Kentucky. As of the 2010 census, the population was 23,356.[1] Its county seat is Paintsville.[2] The county was formed in 1843 and named for Richard Mentor Johnson, War of 1812 general, United States Representative, Senator, and Vice President of the United States.[3] Johnson County is classified as a moist county, which is a county in which alcohol sales are not allowed (a dry county), but containing a "wet" city, in this case Paintsville, where alcoholic beverage sales are allowed.

Eastern Kentucky around 1820. Future Johnson County is marked in red.

Johnson County was formed on February 24, 1843 by the Kentucky General Assembly from land given by Floyd, Lawrence, and Morgan counties.[4][5] At that time, its county seat of Paintsville had already been a chartered city for nine years. Homes had been built in Paintsville as early as the 1810s.[6]

Many of the families at the beginning of Johnson County's formation were of Scottish, Irish, English, or German descent. Also, a fact lost to most historians is the large population of French Huguenots who were confused as English because they fled via England en route to the United States. Many of these settlers migrated from North Carolina, Pennsylvania, and Virginia following their participation in the Revolutionary War.

As Johnson County and its county seat had begun to thrive, in 1860 the Civil War became a disrupter. Like other border areas, brothers fought against brothers, tearing families apart. Johnson County was not only part of a border state during the Civil War, but it was a border county as well.

Sometime between 1860 and 1862, the county enacted an ordinance that neither the Union or Confederate flags were to be flown within the county. This was repealed quickly after Colonel James Garfield's Union brigade marched through Paintsville on its way to defeat the Confederate cavalry at the Battle of Middle Creek in Floyd County.[7]

Following the Civil War, Thomas Jefferson Mayo moved to Paintsville to fulfill a role as a gifted and talented teacher. He fathered John C. C. Mayo, an important figure in the development of eastern Kentucky. The county citizenry is divided on their loyalty to his memory. Some would say he was a benefactor who assisted in the development of Paintsville, and as a result, Johnson County. That he helped develop banks, churches, streets, public utilities and railroad transportation. Others would say he was directly responsible for the huge influence coal companies had over the county's vast coal resources and the reason the region remains so economically depressed to this day. 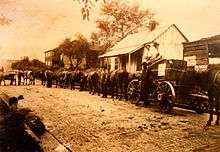 The funeral procession of John C.C. Mayo through Paintsville in Johnson County, 1914.

Coal was important for Johnson County and the rest of eastern Kentucky even before the Civil War, but its development halted at the start of the war. Financing was slow to return to the coal industry in eastern Kentucky and this inhibited development in Johnson County. The people were suspicious of outsiders and Mayo, a school teacher, was a known quantity and one of their own. So he was invaluable in helping the coal industry to gain a firm foothold in the coal fields of eastern Kentucky and to the industrialized north which spurred the development of railroads in the area. Carpetbaggers from the North became a common sight in the area. It was during this time that many of the citizens of Johnson County were given misleading information and sold all mineral rights to their property for pennies on the dollar of what the rights were worth. In some cases, for a new shotgun. It was also during this time that many people lost their property due to a strange rash of fires in several county seats, destroying deeds and records of ownership, which paved the way for land-grabbers to take what the owners did not want to relinquish.

The Chesapeake and Ohio Railway first opened its Paintsville depot on September 1, 1904, following 25 years of work connecting it to Lawrence County. The rails were paid for by donations, stocks and bonds, and the hard work of local citizens. History shows that the rail companies leaked information and frequently changed planned routes to create bidding wars and to finance the rails. Following the development of the railroad, tens of thousands of tons of coal were being transported out of eastern Kentucky by 1910.

Mayo went on to be a political lobbyist, and eastern Kentucky's only member of the Democratic National Committee. He had influence in electing Kentucky's governors, members of Congress and the election of President Woodrow Wilson.

He died on May 11, 1914, after becoming ill following a trip to Europe. During his life, he built a historic mansion in Paintsville which has become known as Mayo Mansion.[7] [8] 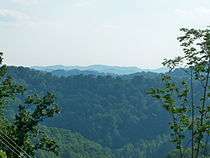 Big Sandy Regional Airport, located in adjacent Martin County, is the nearest airport. It is used as a general aviation airport.

The Johnson County School District, which operates schools throughout the county, including the city of Paintsville, operates the following schools:

Johnson Central High School performs well in various areas and is well known statewide for their academic, football, and basketball teams. The high school was recently named a U.S. News & World Report Top American High School, being given a bronze award. Also, the school recently became WSAZ's first 'Cool School'. Johnson Central High school is considered a "powerhouse" in the high school Quick Recall scene, starting with the 1994-1995 season. They are also noted as a well-performing national quiz bowl competitor. Their football team, coached by Jim Matney, in recent years, has been noted for their up-and-coming program and very successful seasons. In fact, the 2006 Season was a record one, having a 13-1 record. The basketball team is coached by Tommy McKenzie and played in the Kentucky High School Athletic Association (KHSAA) State basketball tournament. Johnson Central offers many clubs including STLP, FBLA, DECA, Beta, FFA, HOSA, SkillsUSA and FCCLA. Johnson Central is also home to a new Career Technology Center.

The Paintsville Independent School District also operates two schools: Paintsville Elementary School, a K-6 facility, and the 7-12 Paintsville High School. Paintsville High also has earned numerous sport titles . The school has won boys' state championships in golf, baseball and basketball and made it to the finals of the state football playoffs. Note that in Kentucky, the only sports in which schools are divided into enrollment classes are football, cross-country and track.

Both the Johnson County and Paintsville Independent districts met all of the No Child Left Behind standards set by the national government.[20][21]

Two private schools also operate in the county: Our Lady of the Mountain School (K-8) and Johnson County Christian School.

In the same year as Mayo's death (1914), the first county fair was held in Paintsville, where the first Apple King was also crowned.

In 1962, Johnson County hosted the first Kentucky Apple Festival,[7] which has been held annually in Paintsville since. The streets of downtown Paintsville are closed to vehicular traffic and festivities to include live music and entertainment, along with various competitions.

This scenic state park contains a 1,140 acres (4.6 km2) lake, a 12,404-acre (50.20 km2) wildlife management area, a marina, a 4 lane boat dock, a restaurant, a convenience store, boat rentals, multiple picnic shelters, playgrounds, and both developed and primitive camp sites. It is located on route 2275 at Staffordsville, just a few miles out of Paintsville.

The Paintsville Recreation Center contains a basketball court, a playground, and a volleyball court. Located on Preston Street in Paintsville.

This 18-hole golf course was established on September 27, 1929, making it one of the oldest golf courses in Eastern Kentucky.[22] The country club was built in 1930 by the WPA and is on the National Register of Historic Places.[23] Located on Kentucky Route 1107 in Paintsville.

This museum has many exhibits that tell the stories of the country music stars that grew up near U.S. Route 23 in Eastern Kentucky. Located at 120 Staves Branch in Paintsville.

This museum tells the history of the local area's coal mining industry. Located on Millers Creek Road in Van Lear. 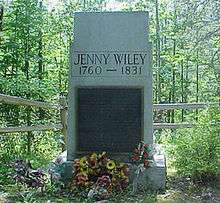 This 43-room mansion was built by John C. C. Mayo between 1905 and 1912 and now serves as Our Lady of the Mountains School. Located on Third Street in Paintsville.

The church was also constructed by John C. C. Mayo, who hired 100 Masons from Italy to construct it. The church has an organ donated by Andrew Carnegie and has several large stain glass windows. The church opened in the fall of 1909. Located on Third Street in Paintsville, beside Mayo Mansion.

Jenny Wiley is a historical figure who was captured by Native Americans in Virginia. After she escaped captivity, she reunited with her husband and lived in Johnson County until her death in 1831. Her grave is located just off Highway 581 at River.

This 420-foot (130 m) pedestrian only swinging bridge is the world's longest plastic bridge. The deck of the bridge is made of glass fiber-reinforced polymer. It crosses the Levisa Fork of the Big Sandy River and connects the communities of River and Offutt. Located on Kentucky Route 581 at River.

The Mountain Homeplace gives a unique look at a replica of an Eastern Kentucky farming community from the mid-nineteenth century. It contains a one-room schoolhouse, a church, a blacksmith shop, a cabin, a barn, and farm grounds. There are also demonstrations of old time skills and crafts. It is located near the dam at Paintsville Lake State Park.

Johnson County is also the former home of the Enterprise Association of Regular Baptists, which was organized on Friday, October 26, 1894 at Enterprise (now known as Redbush), Kentucky. The association now resides at 1560 Nibert Road, Gallipolis, Ohio, 45631.[24]